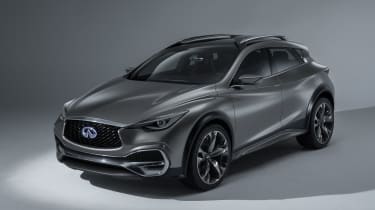 As Nissan's next Micra is set to take shape at the Geneva Motor Show in the form of the Sway Concept, the firm's luxury brand Infiniti will pull the wraps off its new QX30 – giving a glimpse at the production version of the compact SUV, which is due to appear in 2016.

Our exclusive studio shots show how the brand’s Audi Q3 and Range Rover Evoque rival will look, with most design details expected to be carried over. Infiniti describes it as a model that "looks beyond the practicality and conformity expected of the segment". 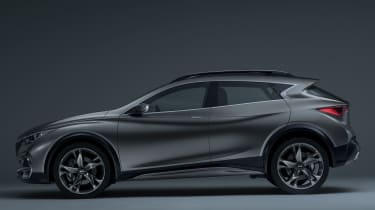 The coupé-style profile and rugged stance are combined with dramatic lines and a swooping side kink. It also adapts Infiniti’s family face, with a striking lower grille design. The overall shape and style is very similar to the firm's upcoming Q30 hatchback, but carbon-fibre body cladding and rugged skidplates give it a more purposeful look.

As with the company’s QX50 and Q50 models, the jacked-up QX30 will be based on the platform of a smaller car – in this case the Q30 hatchback. That model is tipped to arrive in showrooms before the crossover, right at the end of 2015, as a rival to the BMW 1 Series. 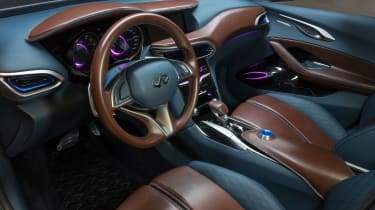 The interior is described as “warm and inviting”, with four wraparound seats and a driving position that is 30mm higher than the hatchback's thanks to 192mm of ground clearance. At 4.4 metres, the concept is marginally longer than the Q3, so is likely to offer similar levels of space despite the four-seat arrangement.

Both models will sit on Mercedes’ new MFA modular platform, which underpins the A-Class hatchback and GLA small crossover. The Infiniti will also borrow 2.0-litre petrol and 2.1-litre diesel engines from Mercedes. There’s even potential for a hot QX30 to appear to take the fight to the Audi RS Q3.