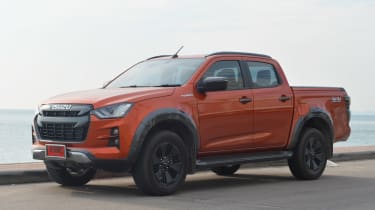 This is the first time Isuzu and Mazda have collaborated on a pick-up truck, and the end product appears to combine the best bits from both brands. The new D-Max is a medley of Isuzu robustness and capability with Mazda sophistication and refinement, which addresses the former’s traditional weaknesses. It’s good to drive by pick-up standards, and is jam-packed with an array of advanced driver assist systems. The return of a rear diff-lock will also appeal to the more extreme operators.

Since the early days of the Isuzu Trooper, the Japanese firm’s reputation for building hardy vehicles that stand up to rough and rugged outdoor life has endeared the brand to demanding industries like agriculture, forestry and construction.

However, unlike its more comfortable and progressive stablemates, such as the Ford Ranger and Nissan Navara, the D-Max has struggled to break into the mainstream UK pick-up market. But, thanks to a tie-up with Mazda, that could all be about to change.

This is the first partnership between the two manufacturers, and it’s hoped Mazda’s expertise in passenger car technology and driving dynamics will help the new D-Max appeal to the lucrative lifestyle pick-up market. 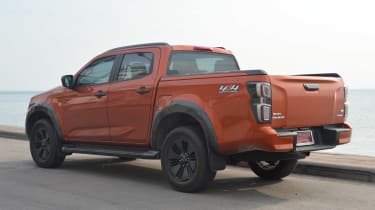 Isuzu sets the precedent on the outside. The new D-Max model sports new body panels all-round, along with a more imposing grille and distinctive U-shaped LED headlights. The chassis is almost completely new and around 80kg lighter, thanks to an aluminium prop shaft and higher tensile steel plates, which have also increased the rigidity by around 20 per cent.

Inside, Isuzu’s designers have used hexagonal boxouts for the infotainment system – which includes a nine-inch touchscreen display on high-end models – and air-conditioning controls. There’s an impressive contrast between hard and soft-touch materials, which create a very modern and functional cockpit.

Noteworthy technology features on the new D-Max include voice recognition, as well as Apple CarPlay and Android Auto. There are safety features such as rear cross-traffic alert, blind-spot monitoring, brake assist and hill descent control, too. There’s no autonomous emergency braking, however.

European markets will get a 1.9-litre diesel engine, which delivers 148bhp and 350Nm of torque in the models we tried in Thailand. There’s no shortage of punch low down, but there’s a lack of performance higher up the rev range and, as European markets will not benefit from the higher-power 3.0-litre diesel, it’s likely Isuzu will uprate the performance of the four-cylinder unit to better compete with rivals.

While official test data is yet to be released, Isuzu says the fuel economy will be “among the best in the sector” although, due to the latest emissions standards, AdBlue has had to be introduced. There is the choice between a six-speed manual or an all-new six-speed ‘RevTronic’ automatic transmission.

We were taken by the D-Max’s driving manners thanks to the huge reduction in noise, vibration and harshness (NVH) levels and the smoother gear changes on both the manual and automatic transmissions. 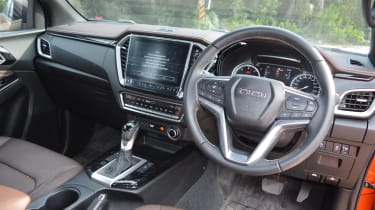 The good news for those who regularly go off-road is that a new electromagnetic differential lock (the diff-lock has been absent from Isuzu’s since 2012) and the shift-on-the-fly system has been introduced, making it quicker now to shift between 2WD and 4WD. The fording depth has increased to 800mm as well.

The load area is exactly the same width (1,530mm) as on the current D-Max model. It is slightly deeper (490mm) and longer (1,495mm) – though it remains one of the shortest in the segment. There’s plenty in the way of cabin storage, and we expect the new D-Max to retain the 3.5-tonne towing capacity and one-tonne payload of the old model.

First UK deliveries are due around September 2020, and Isuzu will continue to offer what is one of the best warranties in the pick-up truck sector. The five-year/125,000-mile guarantee is impressive, no matter which way you look at it.