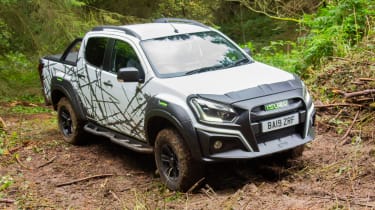 The Isuzu D-Max XTR looks the part and by and large it feels the part too, if a pick-up truck with some much-flaunted toughness and off-road ability appeals to you. It doesn’t go the the absolute extremes of chassis modification to arrive with a fresh edge off road compared with normal versions of the pick-up, while the visual transformation is ultimately the most appealing aspect. The engine is a weak point and performance is lacking, but pitched against the Ford Raptor, the price really isn’t.

While Isuzu has no presence in the UK car market any more, the Japanese marque’s hand in the nation's commercial vehicle is an ever-strengthening one, and one that the brand hopes will flourish next year when a new version of the Ford Ranger rivalling D-Max arrives in showrooms. In fact, it’s already been revealed in a spec ready for the Asian market.

Until it makes its way over to Europe, the second-generation version of this hard-wearing workhorse is being given a rather typical send-off. New special and limited-edition versions of the D-Max are working well for Isuzu’s expanding dealership network, and this one, the XTR, is positioned as the most ‘lifestyle’-orientated version yet.

This is a pick-up of the same mould as the Ford Ranger Raptor, majoring on an aggressive makeover and trick suspension componentry to add kerb and off-road appeal.

Visually it’s transformed with new black-plastic moulded treatment front, side and rear, with flared wheel-arches and heavy duty-looking 17-inch wheels shod in chunky off-road rubber from Pirelli. It rides 250mm taller than a regular D-Max, and completing the look are new black side steps and a tailgate spoiler.

Inside, the seats are now cloaked in leather and suede, and finished with bright green XTR logos embossed on the backrests. There are additional suede touches and carbon-fibre trim elements designed to give the cabin a more upmarket touch, but it still feels like a rough-and-ready environment rather than a car-like one, even with the addition of a new steering wheel with a partial suede rim and snazzy green stitching. 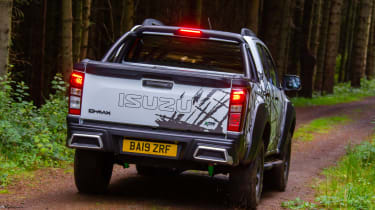 Back on the outside, you’ll spot plenty of vibrant green chassis componentry sticking out from underneath the D-Max XTR; this is important.

The suspension set-up has been totally overhauled by UK specialists Pedders, in a bid to make this the most capable version of the D-Max when the going gets tough. New springs join in too, designed to ensure acceptable ride quality on road, while the brakes are also new, and provide supposedly better stopping power than before.

On that last point, the D-Max certainly still feels its weight. It weighs almost two tonnes empty, so standing on the middle pedal still doesn’t quite bring the truck to a totally abrupt halt, and it feels like the braking could be better. 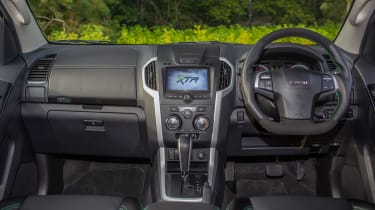 Ride quality is acceptable, though, when you consider the context of what this truck is. Sure, with an empty pick-up bed it’s still a jarring experience, but the body feels well controlled, despite the increase in ride height raising the centre of gravity.

The engine, while decently economical if Isuzu’s 40.4mpg claims stand up, is still an agricultural thing in character. It needs revving out to get moving, soon booming around the cabin and combining with steering and a gear change that remain very much embedded in commercial vehicle territory, rather than approaching the near car-like action of the latest Mitsubishi L200. It qualifies as a passenger car rather than a CV, so 70mph, not 50mph, applies as the legal speed limit for the XTR.

Will buyers mind these flaws? Probably not. The XTR’s main appeal lies in its looks but also its prowess off road - and it stands up here very well. Like all versions of the D-Max, the XTR features selectable four-wheel-drive with a locking central differential and selectable low range. Extremely effective hill descent control, high levels of grip and great visibility combine to deliver a pick-up with serious mud-plugging capability.

Elsewhere, equipment levels are strong and the XTR features creature comforts such as heated front seats and strong infotainment. Best of all, though, this represents a cost-effective alternative to the Ford Raptor if you’re in the market for a pick-up with macho appeal. It’s much cheaper on list price than the Ford, but because it still qualifies as a commercial vehicle, it also qualifies for a VAT exemption. Do the maths, and it’s a very tempting saving for a pick-up that’s 80 percent of the way there.