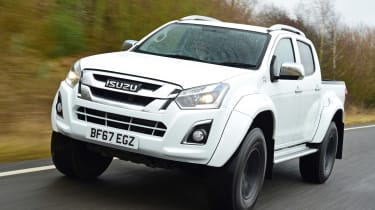 The Isuzu D-Max AT35 is a real guilty pleasure. It's a unique vehicle that's designed for off-roading, but we can see how the Arctic Trucks upgrades will appeal to high-end pick-up truck and 4x4 buyers who want to get noticed. Its mini monster truck looks are certainly appealing, but you're unlikely to need its added off-road ability the vast majority of the time, while the larger proportions make it a liability if you're going to use it to cruise the King's Road. The bigger tyres do help improve the standard D-Max's ride a little, but in every other way the AT35 is an expensive trinket that will cost more to run than a standard D-Max, yet it can't match the quality of any other rivals at its £45k price point. Having said that, it's also a lot of fun, and we can definitely see its appeal.

The Isuzu D-Max is a staple of the pick-up truck scene. While rivals such as the VW Amarok and new Mercedes X-Class aim to give SUV-style luxury to the sector, the D-Max is a more utilitarian choice. It was given an update in 2017 with slightly different looks and a new, downsized and more efficient 1.9-litre diesel engine, but the model range stayed the same. As a result, there are a variety of trims on offer that go from the basic to the well-specced. Now Isuzu has introduced the latest version of its flagship, the AT35 Arctic Trucks.

Arctic Trucks is an independent company that offers extreme off-road conversions of pick-up trucks and 4x4s. It offers upgrades to the Toyota Hilux (it built the red Hilux used by the Top Gear TV show to get to the North Pole) and Land Cruiser, but the Isuzu D-MAX is the only Arctic Trucks conversion that's offered directly by a manufacturer in the UK.

AT35 refers to the overall diameter of the monster new set of wheels and tyres fitted to this D-Max. It uses 35-inch Nokian Rotiiva rubber, and the tyres are fitted to 17-inch Arctic Trucks black alloy wheels. These raise the overall height of the D-Max by 185mm (7.3 inches) when compared to the standard D-Max, but there's much more to the Arctic Trucks update than just a set of monster tyres. 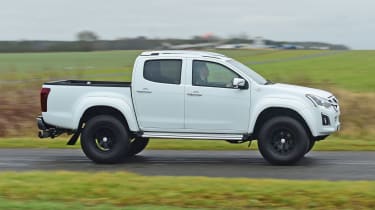 Under the skin, the suspension has been replaced with Fox Performance Series suspension that offers greater travel to accommodate the new wheels and tyres. Elsewhere, a set of wheelarch extensions cover the wider tyres, and mud flaps help to stop the dirt flying.

Larger running boards are fitted to help with cabin access, while the wing mirrors are mounted on extensions that mean you can better see the extremities of the truck. Arctic Trucks claims that the amount of lift that the D-Max has been given means the bodywork doesn't need to be modified to accommodate the big wheels and tyres, and we found that the tyres didn't rub, even when full lock was applied.

On board, Arctic Trucks branding helps identify this flagship model - just in case you were blindfolded when you climbed in - while the standard kit list is the same as you'll find on a top-spec D-Max Blade. Pretty much the only options choices you have to make is which colour to choose and whether you want a manual or auto gearbox, with both gearboxes offered at the same price. 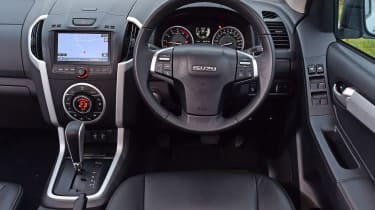 However, as the AT35 is based on the Blade model, that means the fit and finish leaves a little to be desired. When you consider that it weighs in at over £45k for VAT-paying private buyers, you'd expect a better quality of plastics and switchgear. Another quibble is with the Pioneer infotainment system, which isn't great to use to the point of frustration.

Fire up the 162bhp 1.9-litre diesel, and you get a familiar diesel rattle, but it does settle down once warmed up. It's not the quietest or most powerful diesel on sale in a UK truck, but it responds reasonably well. On the road, the AT35 has a ride familiar to most other pick-ups. The rear suspension is designed with a heavy payload in mind (like the rest of the D-Max range, the AT35 has a payload over one tonne), so it does bounce around a bit when empty, but adding the fat tyres hasn't compromised the ride much. In fact, those big sidewalls help to cushion the cabin a bit better than in other D-Max models.

One thing to bear in mind is the extra width the truck is carrying. Those flared wheelarches add 310mm, or more than a foot, to the width of the standard D-Max. But because none of this extra girth is added to the cabin, it's easy to forget that this truck is that much bigger. And at nearly 2.2 metres wide, it measures larger than some urban width restrictions.

While that means the AT35 might struggle in an urban environment, it's a different story in the great wide open. Those Nokian tyres have an off-road biased tread, so there's more grip on offer than you'll get from a conventional truck. They're not so knobbly that they add a harshness to the truck's ride on tarmac, but the tread is chunky enough to improve the D-Max's off-road performance. Add in the extended suspension travel and the D-Max's standard suite of locking mechanical 4WD components under the skin, and the only limiting factor to the AT35's off-road ability will be its colossal dimensions and long wheelbase.