Jaguar SUV on its way

Our exclusive pictures show how the 2015 Jaguar SUV could look 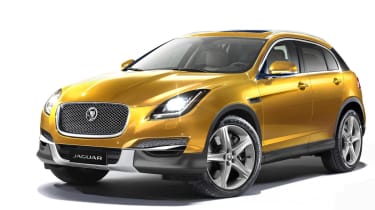 Jaguar has had an SUV on its wish list for a decade now, but the time’s come to turn it into a reality. A source has revealed the car is now in its advanced design stages, and will be on sale by 2015.

And our exclusive images – based on inside information – give you the best idea yet of how the finished product will look.

Forget the bluff front ends and boxy silhouettes that define Land Rover’s line-up; the Jaguar is designed to blur the lines between a low-slung saloon and a high-riding SUV.

Steeply raked front and rear screens, plus short overhangs, give an instantly sporty shape, while the blacked-out C-pillar is a nod towards the luxurious XJ. Plus, the upright lights take their inspiration from the F-Type.

With its compact footprint on the road, the long-awaited SUV (expected to be called Q-type or XQ, after Jaguar trademarked both names) will battle the BMW X3 and Audi Q5. But rather than borrowing its underpinnings from the Range Rover Evoque, the newcomer will share its chassis with Jaguar’s forthcoming BMW 3 Series rival.

The SUV and compact exec are expected to use a chopped-down version of the XJ’s all-aluminium platform, which will not only help to keep weight down but spread the development costs, too. Both will also get a fuel-saving electric power-steering system – a Jaguar first that was developed on the C-X75 supercar – plus they’ll be offered with the option of rear or four-wheel drive.

Given the SUV’s size, the focus will be on four-cylinder engines. These are expected to include the 240bhp 2.0-litre Si4 turbo and 2.2-litre SD4 diesel (in a variety of outputs) from the Evoque. But both are set to be re-engineered for better fuel economy and refinement, while the latest eight-speed ZF auto box will be fitted as standard.

At the top of the range, a 340bhp version of Jaguar’s 3.0-litre supercharged V6 could be offered, as could a petrol-electric hybrid. The hybrid is expected to use tech derived from the C-X75 project, with one electric motor working with the engine to drive the rear axle and a second turning the front axle for four-wheel drive.

Jaguar is on the rise, with global sales up six per cent year on year in 2012. But it still has only a fraction of the volume of Land Rover, which has cashed in on the global SUV boom. However, with the new F-Type exceeding sales expectations, and the SUV and 3 Series rival set to enter highly lucrative classes of the market, the potential for Jaguar growth is enormous.