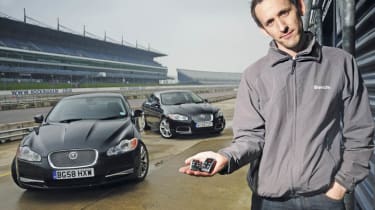 Our oil-burner was finished in the same moody black paint as the 503bhp supercharged saloon we had on test, so we played a quick game of spot the difference.

Apart from the odd 296bhp, all our car was missing were the range-topper’s smart alloy wheels, its pair of bonnet vents and the chrome-rimmed air intakes in the front bumper.

The XFR is a stunning achievement – fast, stylish and comfortable in equal measure. But our long-termer didn’t feel like a poor relation. Its luxurious cabin and relaxed performance are a constant reminder why it’s our reigning Car of the Year. When deciding who drove which model on the trip home from our test, there wasn’t a short straw to draw!

Our XF is pretty practical, too – which isn’t something you expect from an executive saloon. In fact, since inheriting the key from former road test editor Chris Thorp, I’ve been inundated with requests to borrow the Jag. The least likely came from editor in chief David Johns, who needed to move a giant glass table top. His long-term Mercedes C-Class doesn’t have folding rear seats, unlike our XF – which was perfect for the job.

It’s also great for carrying a full load of passengers, thanks to its spacious rear seats. The only thing is, I find myself apologising for the firm ride when driving around town. The optional alloy wheels do our big cat few favours – although they look great. Elsewhere, I’m a big fan of the uprated Bowers & Wilkins sound system. With its full iPod integration, it has transformed my daily drive to and from the office, and I rarely bother listening to the radio. But that’s probably just as well, because colleagues have complained about its poor reception.

In terms of repairs, the Jag hasn’t cost us a penny yet, but its fuel economy has taken a knock as my commute is so heavily congested. Still, 29.5mpg represents a decent return for such a luxurious saloon. It’s also one area where the XFR can’t hope to compete – it achieved only 17.3mpg during our group test.

Previous reports on the XF have highlighted a problem with the sticking fuel filler flap. But I think I may have found the solution. You have to press the flap to unlatch it, yet it seems to need a firm push. This happened to me once, and I managed to reset the flap for a second attempt simply by activating and then releasing the central locking system. It’s a minor niggle, though, and the sheer sense of occasion from the driving experience sets the XF apart.