Roaring big cat has made a huge impression over the last two months – and here’s why we’ve fallen for the mighty V8 supersaloon. 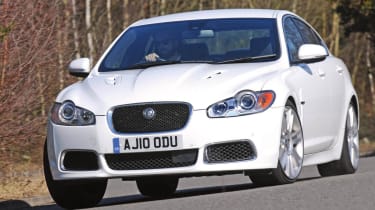 5
Ever heard of range anxiety? It’s one of the terms that has come to define electric car development over the past 12 months – and is used as shorthand to describe a string of emotions linked to driving an expensive, conspicuous, hi-tech machine that offers few guarantees of being able to reach its intended destination.
It seemed to me an ideal way to kick off the description of my relationship with our long-term Jaguar XFR. Finished in brilliant white, our big cat had no problem attracting attention. The soft blue cabin lighting provided a perfect backdrop to advanced touches such as the rising gear selector – now a Jaguar trademark – and the touchscreen sat-nav.
Competition for the keys – particularly over weekends – was intense. In fact, now I think about it, such was the demand that I did not even see the thing for the first three weeks of its two-month stay.
Our car-obsessed road test team found plenty of excuses why the Jag was needed here, and why it was needed there. It quickly became apparent that I would have to book myself into the XFR weeks in advance!
A first drive home, late at night, confirmed why my colleagues were so keen. The Jag is one of the most charismatic cars of its kind on the road, and the 5.0-litre supercharged V8 powerplant delivers massive performance. In short, this was the fastest, most powerful model Auto Express has ever run on its test fleet – and so the praise for its straight-line speed was never in short supply.
But in the same way that the superlatives kept us celebrating this car’s performance, so the expletives flowed when it came time to describe petrol consumption. The biggest single fill was a whopping £78.32 for around 60 litres of super unleaded. Not bad, you might think – until you read in our fuel log that we splashed in another 14.5 litres for £18.42 only 40 miles later... That’s 12.5 miles to the gallon. In fact, even our best efforts saw us return a mere 22mpg.
With average consumption of 18.8mpg, the car’s 70-litre tank wouldn’t carry you further than 290 miles – the dim glow of the fuel reserve light was a regular feature of the dashboard illuminations. A bigger tank would certainly help fix this.
OK, so this would add to the XFR’s steep running costs, but I think buyers of high-performance machinery climb into the driver’s seat with their eyes open. What’s more, the power and drama on offer from this car’s engine and chassis do go a long way to making up for the investment.
Sweet steering, comfortable suspension and powerful brakes all made our XFR as exciting to drive the 20th time as the first – something that can rarely be said of other vehicles.
So it’s a pity this will be the Jaguar’s only report. Our model has already been reclaimed, and there’s now an empty spot in the Auto Express car park where the XF once proudly sat. However, the good news is that a shiny new XKR has taken its place. I’m told it arrived the other day, although I’ve yet to see the keys. The road testers need it, apparently...

“Yes, the XFR spent more time in  BP stations than Alan Partridge! And yes, an XF Diesel S would probably be as fast in most situations. But that’s missing the point. I spent only one weekend in the Jaguar and I loved the sound of its V8 – and  the fantastic thrust it provided.”