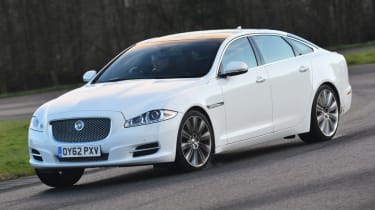 It’s hard not to fall for the Jaguar’s charms. Not only does it look great, but its cabin has a truly bespoke feel and it’s fun to drive. If you can live with the firm ride and cramped rear headroom, it makes a charismatic choice.

The BMW 7 Series isn’t the only luxury limo that has benefited from a recent nip and tuck. At nearly three years old, the sleek Jaguar XJ has also had a mid-life refresh.

Aimed at improving comfort and boosting efficiency, the changes include a new comfort suspension pack, an advanced eight-speed auto and fuel-saving stop-start. However, while the XJ’s underpinnings have been given an update, the stylish exterior has been left alone. With its gaping chrome grille, sweeping roofline and LED tail-lights, the Jaguar is easily the most eye-catching car of our trio. And although we’re not convinced by the slightly awkward black C-pillar trim, the glamorous big cat is still the car for making a grand entrance.

The Jaguar boasts an equally extrovert interior. Compared to the sparse Mercedes and conservative BMW, the XJ’s sweeping dash design is a breath of fresh air. Neat details include the trademark rotary gearlever that rises out of the transmission tunnel and the metal-finish ‘eyeball’ air vents, plus cool phosphorus blue lighting.

Still, the leather trim and polished wood inserts are standard, as are useful gadgets such as sat-nav, a DAB radio and keyless entry. The long-wheelbase car also gets rear privacy glass, an electrically operated rear blind and aircraft-style folding tables in the front seatbacks. Disappointingly, neat extras such as powered soft-close doors aren’t even on the options list.

Nevertheless, there’s loads of legroom in the back, while the standard panoramic glass roof increases the sense of space. However, it also eats into headroom, and tall passengers’ heads will brush the rooflining. The XJ must also give best to its rivals for comfort and refinement.

In isolation the Jag is very quiet when cruising, but it’s not quite as well insulated from wind and road noise as the 7 Series and S-Class. And while the ride is slightly softer than before, it is still the firmest here, often getting unsettled by bumps and potholes.

The trade-off for this compromised ride is sharp handling. Despite its vast size and quick steering that lacks feedback, the XJ slices through corners with agility. It does not grip as hard as the four-wheel-steered BMW, but it’s still surprisingly fun through bends.

The Jaguar’s sporty credentials extended to our test track, where its combination of lightweight aluminium construction and muscular 271bhp diesel V6 let it sprint from 0-60mph in a mere 6.9 seconds – although that was a tenth slower than the less powerful BMW. Better still, the new eight-speed box provides seamless changes in auto mode, while you can use the steering wheel-mounted paddles for prompt manual shifts.

At £63,135, the XJ costs £1,920 more than the 7 Series. Yet it has more standard kit and slightly stronger residuals, plus looks more distinctive. But will its firm ride and less impressive refinement cost it dear here?