The luxurious Mercedes S-Class still sets the standard for comfort 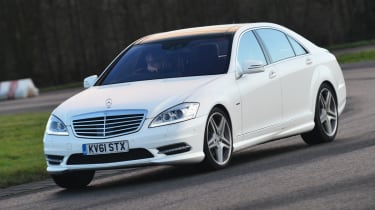 After seven years, the S-Class still rules the luxury car roost. Its grip on the crown has been weakened, but for all-round appeal it’s still unrivalled. Classy looks, an opulent cabin and impressive refinement still make it the top choice for captains of industry and heads of state.

If the BMW 7 Series and Jaguar XJ are to stand any chance of stealing the luxury car crown, then this is the model they must beat. Ever since making its debut in 2005, the huge S-Class has set the standard in the limousine sector. With its imposing looks, upmarket cabin and beautifully engineered underpinnings, the Mercedes is one of the few models that can rightfully claim to be the ‘best car in the world’.

And even now, nearly seven years after its debut and with an all-new model just around the corner, the S-Class still exudes understated class and good taste – although our car’s optional £1,950 paint finish won’t be to all tastes. The styling is not as eye-catching as the sleek Jaguar’s, but there’s still a great sense of occasion about the Mercedes.

Whether you’re driving or being driven, the S-Class’s beautifully executed cabin is a masterclass in thoughtful design. The uncluttered dash, single-stalk gearlever and top-notch materials all add to its special feel, while the COMAND infotainment controller is as intuitive as the BMW iDrive set-up. And while the interior is not as glamorous as the XJ’s or driver focused as the 7 Series’, it’s still a great place to spend time.

The long-wheelbase layout means there’s plenty of room to lounge about in the back, while the powered and heated leather seats are hugely comfortable. Large windows help add to the sense of space and the vast 560-litre boot is the biggest here.

It’s not all good news, though. The Merc has all the essential kit, such as sat-nav, Bluetooth and climate control, but it’s not as well equipped as the Jaguar. To personalise the car, the pricey options list means you’ll need deep pockets – our test model had an eye-watering £108,910 price tag, which is a hefty £43,500 premium over the standard model.

Thankfully, the S-Class’s exceptional refinement comes as standard. Wind and road noise are virtually absent, while the standard air-suspension effortlessly soaks up bumps. Better still, the 3.0-litre V6 is whisper-quiet at idle and silky smooth on the move. However, the Mercedes’ relaxing nature unfortunately extends to its performance.

Not only is it the heaviest car here, it’s also the only one with a seven-speed automatic gearbox – the BMW and Jag both have an eight-ratio transmission. As a result, the S-Class was slowest in all of our acceleration tests. With a 0-60mph sprint time of 7.4 seconds it’s hardly slow, but away from the track it doesn’t feel as eager as its rivals, while the gearbox isn’t quite as slick as the unit in the 7 Series. And although the Mercedes feels surprisingly agile for such a big car, its steering isn’t as sharp as the BMW’s and there’s more roll in corners – even with the dampers on the firmer Sport setting.

At £65,410, the S350 is the most expensive car here, but its residuals are a bit stronger. Yet there’s more to buying a limo than value for money. The Mercedes still leads the way for upper-crust image, comfort and refinement. Will that be enough to paper over the cracks appearing in its seven-year-old design and keep the S-Class at the top?