The revised BMW 7 Series is great to drive, but is that enough for victory? 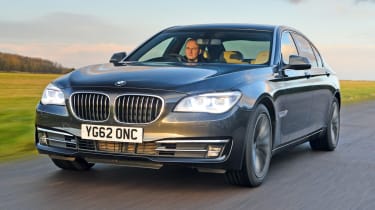 Latest tweaks have given 7 Series a much-needed lift. It’s more refined and comfortable, while low CO2 emissions and free servicing cut costs. Yet it still looks underwhelming, while the best driving experience comes only via costly options.

The 7 Series has been sitting at the top of the BMW model range for more than three decades. Yet despite its heritage, the flagship has consistently failed to make an impact against more exclusive and imposing rivals.

So in a bid to revive its fortunes and finally overcome the competition, the vast 7 Series has been treated to a mid-life makeover. Included in the refresh are tweaks to the suspension for greater comfort, plus even more efficient engines. Designers have also made changes to the car’s styling – although you’d be hard-pressed to notice.

At the front are a revised grille and reprofiled bumper, while our test car also benefited from distinctive £1,665 LED adaptive headlamps. Elsewhere, the 7 Series looks virtually identical to its predecessor, which means it simply can’t match the rakish Jaguar XJ and classy Mercedes S-Class for head-turning kerbside appeal.

Unfortunately, this low-key approach extends to the interior. There’s nothing wrong with the first-rate build quality and top-notch materials, which are both on a par with those of the beautifully finished Mercedes. It’s just that the 7 Series lacks that vital feelgood factor.

For instance, the logically laid out and slickly designed dashboard looks exactly the same as the one you’ll find in the much cheaper 5 Series. And the three-spoke steering wheel appears to have been lifted straight out of the 1 Series family hatchback. It’s possible to tailor the cabin with various bespoke leather seat coverings and trim materials, but you’ll need deep pockets.

That’s not to say the 7 Series doesn’t boast some neat features. For example, our car was fitted with the £510 LCD multifunction instrument display, which alters the look and colour of the dials depending on whether you’re in the Sport, Comfort or fuel-saving EcoPro driving modes.

And if you opt for the eye-wateringly expensive £2,055 rear-seat entertainment package, then you get a pair of tablet computer-style screens hanging from the back of the front seats, plus a separate iDrive controller for rear passengers. These occupants will have no complaints about the amount of available space, either.

The long-wheelbase body means even tall passengers will be able to stretch out in comfort, while there’s more headroom than in the low-slung Jaguar. Better still, the cabin is as quiet as it is comfortable.

Various tweaks, including improved aerodynamics, help make it a calm and relaxing environment. It’s every bit as hushed as the S-Class, with virtually no wind noise and only a trace of tyre roar on rough roads. Air-suspension at the rear also helps the 7 Series effortlessly shrug off bumps that send a shudder through the Jaguar’s cabin.

Yet this is still a BMW at heart, which means your chauffeur will enjoy it as much as you. Star of the show is the lusty 255bhp 3.0-litre diesel, which comfortably set the pace at our track with a blistering 0-60mph time of 6.8 seconds. Its real-world pace is even more impressive, thanks in no small part to the new eight-speed automatic gearbox, which shifts ratios with uncanny smoothness. And because this is a BMW, the 730d also feels agile and responsive on a twisting back road.

The electrically powered steering is accurate and provides decent feedback, plus there’s strong body control and bags of grip. However, our car was also fitted with the £1,890 Dynamic Drive chassis and £1,360 Integral Active Steering. The former virtually eliminates body roll, while the latter is a four-wheel-steering set-up that boosts agility around town and improves stability at high speeds. While these extras are pricey, they allow the BMW to be transformed from luxury cruiser to poised sports saloon at the touch of a button.

When it comes to the question of cash, the 7 Series appears to hold the advantage here. Not only is it the cheapest to buy, but it benefits from the lowest CO2 emissions and comes with five years’ free servicing. Yet you’ll have to pay thousands for optional extras to raise the cabin ambience, while it still doesn’t look as special as its rivals. Will these stand between the BMW and victory?