Jeep to launch nine new or revised models by 2022

Jeep boss Mike Manley reveals the brand's product plan, with nine new or updated models due and diesel to be discontinued 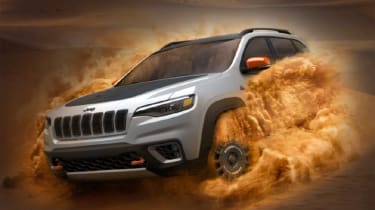 Within the next five years, Jeep will launch an all-new A-segment SUV to sit below the current Renegade. It will be available with a plug-in hybrid powertrain, while also featuring connected and autonomous features. A refreshed Jeep Compass, as well as an all-new Renegade, will join the new SEAT Arona rival in Jeep’s small SUV line-up.

Manley also confirmed diesel-powered vehicles would disappear from Jeep’s Europe model range over the next five years; petrol, mild-hybrid, plug-in hybrid and fully electric vehicles will replace diesel by 2022. Every model line-up will get PHEV tech, while Jeep’s B, C and D-segment cars will be offered as fully electric.

The SUV brand will additionally launch an all-new Cherokee with the possibility of a seven-seat variant for the first time. The larger Grand Cherokee will also be replaced, again with the addition of a three-row, seven-seat version.

At the top of the range, Jeep will reintroduce the Wagoneer and Grand Wagoneer nameplates, each with plug-in technology. 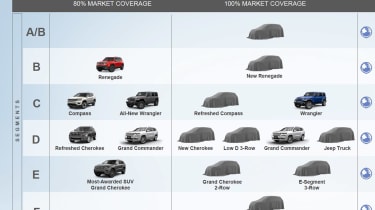 China will be a big focus for Jeep before 2022; the company will launch two China-specific models, as well as launching plug-in hybrid and fully electric power across four of its models in the region. Production will increase, too, with plans to localise the manufacture of at least one additional nameplate within the next five years.

Success of the Trailhawk and Trackhawk models has encouraged Jeep to launch a Cherokee Deserthawk. Manley said the car will launch at the start of 2020, with a “rigorous set of engineering standards” and a “new mark of capability”. It could account for as many as one in 10 Cherokee models worldwide, according to Manley.

What do you think of Jeep’s product plan? Do you think it will be a success? Let us know in the comments below…