With rugged new looks and tweaked mechanicals, the revised Cherokee is set to take on the tough SUV market. 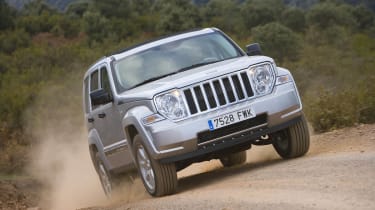 WITH smart looks, clever off-road technology and a well designed cabin, the Cherokee is a likeable, stylish SUV. At £25,595, it’s cheaper than the comparable Freelander – and it has plenty of equipment. It lacks the prestige badge and sophisticated nature of the Land Rover, but the Jeep has a charm all of its own.

The Grand Voyager isn’t the only model in the Chrysler family which claims a first, but could perform better. Thanks to a series of upgrades over the old car, Jeep says the new Cherokee is in a position to take on Land Rover’s Freelander – and at a bargain-basement price.

With a fresh, rugged look, luxurious interior and a hi-tech 4WD transmission, the newcomer shows a lot of promise. But will it succeed in the rough and tumble of the competitive mid-size SUV sector?

The boxy shape is clearly influenced by the firm’s Wrangler off-roader, and made more sophisticated by the classy chrome grille, stylish 17-inch alloys and optional full-length powered canvas sunroof. Despite having the same external dimensions as its predecessor, there’s more space inside the airy cabin. Quality has improved and the leather seats are supremely comfortable. For extra versatility, the front passenger’s seat folds flat to form a table.

There’s only one engine – it’s the same 2.8-litre CRD as in the Grand Voyager – tuned here to 175bhp. Mated to a slick five-speed auto box, it provides strong acceleration and decent refinement. Only a slight clatter at idle reveals it’s diesel.

On the road, the all-new suspension gives the Cherokee car-like composure. And in the rough, hill descent control and a low-range setting for extreme gradients are excellent. The Jeep proves virtually unstoppable.

There is no petrol engine destined for the UK, and we’re only getting the range-topping Limited trim, which has plenty of equipment as standard. Extras on offer include the neat Sky Slider canvas roof fitted to the car we drove. A £950 option, the weather-resistant cloth top can be slid open at the touch of a button by occupants in either the front or the back.

Rival: L. Rover Freelander If money is no object, the Freelander is the best mid-sized SUV around. It excels on and off road and cabin quality is leagues ahead of the pack. But the flagship TD4 HSE diesel model is £30,960.