Is the rugged Jeep off-roader a sound buy second-hand? Our head-to-head compares the past four generations 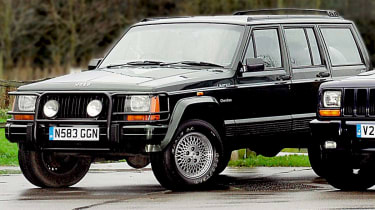 Cherokee Rugged looks and a spacious cabin meant the Jeep Cherokee caused a stir when it hit the UK in 1993. But has the 4x4 stood the test of time?

There’s plenty of choice – all three versions are widely available, and there are petrol and diesel engines, plus Sport, Limited and Limited SE specs. The two petrol units have an appetite for fuel and are relatively low-tech – the 4.0-litre is only marginally thirstier than the 2.5-litre, at 18.2mpg. Later 176bhp models are a bit more frugal, but the 31.1mpg diesel is best.

On the downside, the 2.5 TD is fragile and suffers intercooler oil leaks, blowing inlet manifolds and cracked cylinder heads (costing £1,700 to replace). After 80,000 miles, Cherokees are likely to have noisy rear axles, plus worn limited slip diffs and leaf springs. A replacement axle is £350, a diff £600 and the springs £80 each.

Regardless of age, it’s vital you get proof of servicing every 7,500 miles. Prices start at £4,000 for good examples. All 4.0-litre variants have ABS, air-con and twin airbags. Leather was an option on all but the Limited SE, yet most cars feature it, so avoid any with cloth. There’s no premium for the better 4.0-litre over the 2.5, but pay £200 less for any model in solid red, white or black.

Cherokee facelift You’ll need to look hard to spot the difference between this and the previous model. The front bodywork and rear lights are more rounded, the bumpers deeper and the facia is a bit more modern. The grille is slightly different, too.

You get the same range of engines and the same potential niggles – so add costs for replacement to your budget on high-milers. Post-1997 diesels tend to be more reliable.

Despite its dated looks, this Cherokee holds plenty of off-road appeal, and the selectable dual-mode four-wheel drive makes it a capable 4x4. And while the cabin is cramped by modern standards, the boot offers 1,011 litres with the seats up, and 2,033 litres with them folded. Special editions include the run-out 60th Anniversary, with leather and alloys; prices are about £1,000 less than for a Limited. There’s also the sought after Orvis, which has leather, a 10-speaker stereo and wood trim, and carries a £250 premium over the Limited. A 2001 Y-reg 4.0-litre is around £7,000 on forecourts.

We still favour the big petrol model, which is about £300 cheaper than a similar 2.5 TD. Look out for cars converted to LPG, too, but don’t pay any extra – and ensure it was a certified fitting.

New Cherokee Easily identified by its round headlamps, the new Cherokee made its debut in 2001. Its looks upset some fans, but whatever you think of the styling it’s certainly great value for money now.

Reliability is good, but there was a recall on the lower ball-joints, so check the work has been done. Head and legroom is improved, yet the boot is smaller than before, at 821 litres with the seats up and 1,954 litres with them down.

We’d question whether the Limited – with its colour-coded bumpers and arches, foglamps and extra brightwork – is worth £1,500 extra. But it’s undoubtedly the most popular model.

New Cherokee facelift Again, it’s difficult to distinguish between pre and post-facelift versions of the latest Jeep. The only external difference is at the front, where the foglights move up into the grille and the indica­tors are higher in the bumper. Inside, the instru­ment cluster is revised and the electric window controls are in a more convenient location. Manual models also get six gears, not five.

A special-edition 2.8 CRD Renegade model was available on a 55-plate for a short time. It has spotlights on the roof and a flatter bonnet, but don’t pay more than £500 above forecourt prices for an equivalent Sport.

As with the pre-facelift car, there was also a special-edition Extreme Sport, positioned between the Sport and the Limited. It gets a half-leather interior and coded bumpers, but prices shouldn’t be higher than for the Sport.