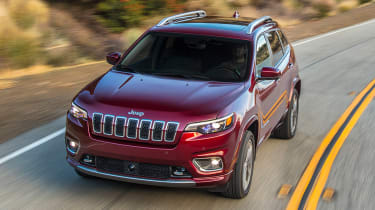 The Jeep Cherokee’s new styling may help flagging sales in America, but the updates are unlikely to transform how the Cherokee preforms in the UK. The SUV retains its smooth ride and incredible off-road ability, but the driving experience remains average and the new turbocharged petrol engine is let down by an ill-mannered gearbox.

It’s been a rough ride for the Jeep Cherokee back home in America, thanks to controversial styling that didn’t really appeal to the tastes of American buyers. As a result, the Cherokee has spent the last five years sitting on the sidelines, even as other similarly-sized SUVs have seen skyrocketing sales in the States.

It’s taken a while, but Jeep finally revealed a facelifted Cherokee at this year’s Detroit Motor Show. Though the new Cherokee won’t arrive in Europe until the autumn, we traveled to California to take a test drive in the US version.

Obviously, styling is the biggest change. All of the sheetmetal ahead of the windscreen is new, with a higher bonnet-line and more conventional lighting assemblies that give the Cherokee a close resemblance to the Grand Cherokee and the new Compass. Reshaping the front end also gave Jeep the opportunity to rework the underlying structure for better crash protection. 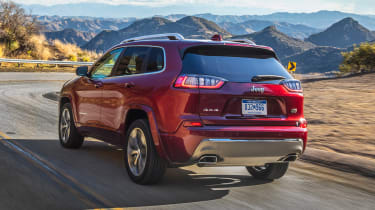 Out back, the entire hatch lid is new, and it’s made from composite materials to save weight. Moving the number plate from the bumper to the boot lid eliminated that vast expanse of blank sheetmetal below the taillights and allowed the latch mechanism to be moved further back into the bumper, freeing up just over 90 liters of additional luggage space. That said, the new Cherokee still trails its rivals for boot volume.

Aside from the styling, the biggest news is the availability of a 270bhp 2.0-litre turbocharged four-cylinder petrol that develops 400Nm of torque. It may be new but it’s not the most sophisticated engine around especially hooked up to the nine-speed automatic gearbox. This transmission has been a thorn in Jeep’s side since the 2014 Cherokee was introduced, and though Jeep has tweaked the programming, it’s still not right. 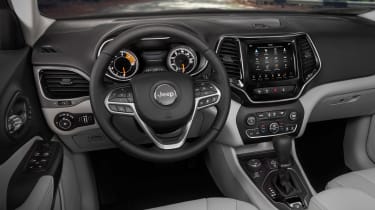 We drove the Cherokee though the aggressive canyon roads north of Los Angeles, and the powertrain was simply too slow in its responses. Prodding the accelerator led to a delay before the gearbox decided to change down, and then another delay while the turbocharger built up boost. By the time the power arrived, we no longer needed it.

Fuel economy is said to be the chief advantage of the 2.0-litre engine over the V6; figures are yet to be confirmed, but it’ll have to be incredibly efficient to offset its shortcomings when it comes to performance. Jeep will announce the full European engine lineup at the upcoming Geneva Motor Show.

The Cherokee’s suspension has been modified to improve ride quality, and the ride remains steady and comfortable, even over rough pavement. Like the outgoing Cherokee, the new one handles well enough, and the steering feel is commendable, but it’s not particularly engaging or enjoyable to drive - at least, not when there’s pavement under the tyres. 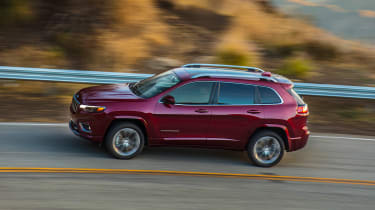 Off-road prowess remains a Cherokee specialty. For our test drive, the Jeep folks carved out a trail of steep climbs, deep ruts, and massive moguls far too severe for the average crossover SUV. The Cherokee Trailhawk - equipped with the best of Jeep’s three all-wheel-drive systems, complete with a low range and lockable differentials, along with Selec-Speed, a sort of off-road cruise control system - tip-toed through the course with no drama. We were impressed, but not surprised.

While the Cherokee’s new looks could change its fortunes in America, we don’t know if they’ll have as much of an impact in the UK. Most of what we like about the Cherokee remains intact, particularly the comfortable ride, Land-Rover-like off-road ability, and the inherent cool factor of the Jeep brand.

Unfortunately, the things we dislike haven’t changed much either, and so long as the new 2.0-litre engine remains saddled by that dreadful gearbox, it’s not much of an improvement over the V6. We predict steady sailing in British waters for the facelifted Cherokee.