Few off-road brands can match the heritage of Jeep. So how does the latest version of its famous Cherokee stack up? 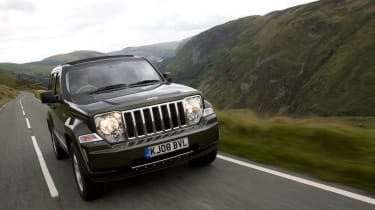 With its trademark seven-slot grille you won’t mistake the latest Cherokee for anything else. Large headlamps, a boxy profile and pronounced wheel arches are the other Jeep styling cues that feature prominently. Its uncompromising looks are at odds with many rivals, which are increasingly car-like in their proportions. The Cherokee is a bluff old-school off-roader that isn’t ashamed of its go anywhere credentials.

You expect a rugged off-roader to feature a workmanlike interior but the Cherokee cabin is a disappointment in every sense. Space is restricted by the large transmission tunnel, which eats into the front footwells, while the simple design of the dashboard looks bland. It’s also made from cheap, unappealing plastics. As a result the Jeep has one of the worst modern car interiors that money can buy. Boot space is also extremely disappointing. The shallow and narrow load area provides just 419-litres of carrying capacity, although the tailgate does have an opening rear window for dropping lighter items through.

You only get one engine option – the firm’s 2.8-litre CRD diesel. It’s pretty refined at cruising speeds, but floor the accelerator and the noise from under the bonnet becomes intrusive. The racket isn’t really justified by its performance either because the oil-burner is slow to respond. Go for the automatic transmission and the sluggish gear changes makes matters even worse. Fuel economy is reasonable for a proper four-wheel drive, and the Jeep is seriously capable off-road thanks to its four-wheel drive transmission and low range gearbox.

Vague steering, fidgety ride comfort and poor brakes leave the Cherokee feeling like a fish out of water on the road. Twisty lanes highlight the off-roader’s cumbersome nature and excessive body roll, leaving keen drivers with little to get excited about. The Jeep is most at home trundling across unsurfaced tracks and muddy terrain. Sadly, few motorists need such capability, which leaves the model with a limited audience.

Compared to its rivals the Jeep is competitively priced, but given its shortcomings it’s not cheap enough. High CO2 emissions also rank it in the most expensive road tax band. The Cherokee range is simplicity itself, with just one engine, two transmissions and a single trim level to choose from. Options are restricted to a full-length canvas sunroof, metallic paint and sat nav.

You get just four airbags in the Jeep but any four-wheel drive will come into its own in poor weather conditions. There is a trade off for the extra traction provided by its four-wheel drive system, and it comes at the pumps. Fuel economy of 31.4mpg and CO2 emissions of 242g/km are nothing to write home about.