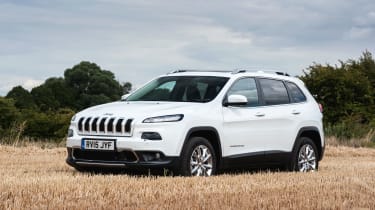 There’s no denying the Jeep Cherokee’s new 2.2-litre engine is more urgent and eager than the old 2.0-litre, but while the engine has improved, the chassis and suspension remain untouched. That means it’s still a bit fidgety around town, and continues to wallow and roll on the open road. It’s competent, but that’s just not enough in a market dominated by Land Rover, BMW and Audi.

At the start of the decade Jeep was on its knees. As part of the Chrysler Group, it suffered complete bankruptcy in early 2009, before quickly being acquired by Fiat later that year.

Jeep’s financial struggles are now long behind it, though, and the brand has seen 23 consecutive months of growth in the UK.  The popular new Renegade now accounts for around 60 per cent of all sales, and a new Qashqai-rivalling Compass is on the way for 2017.

But the Cherokee is still a big player for Jeep. After a four-year sabbatical, the rough-and-ready SUV made a comeback in 2014 and, following feedback on the original engine range, it has just been made available with a pair of new 2.2-litre diesel units. With a choice of 182bhp or 197bhp, the upgraded powerplant replaces the old 168bhp 2.0-litre and sits alongside the smaller, cheaper 138bhp 2.0-litre option.

We were given the chance to drive the higher-power version of the 2.2-litre Cherokee on UK roads – in top-spec Limited guise. It’s identically priced to the BMW X3 xDrive 20d M Sport – and £1,095 more expensive than our current class favourite, the Land Rover Discovery Sport – in SE Tech trim. 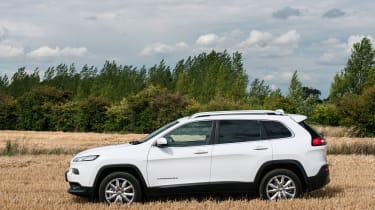 So the competition is tough. But on paper, this new 197bhp 2.2 makes a compelling case for itself. It’s 1.5 seconds quicker to 62mph than before (8.5 vs 10 seconds) and 8mph faster flat out (now 127mph). Crucially, it also has 90Nm more torque, which makes it feel more eager right from the get-go.

Despite the extra performance, the new engine will also do another mile for every gallon of diesel fuel you put in. That means it’ll return exactly the same fuel economy as an Audi Q5 TDI 190, sitting in the same VED band for £145 annual road tax.

In real world driving the Cherokee is not what you’d call fast, and it doesn’t build speed as pleasantly or efficiently as the BMW X3, but the boost in power is welcome and the nine-speed gearbox swaps cogs quickly and smoothly. As before, there’s no steering wheel mounted paddles, and if you switch the ‘box to manual using the conventional lever, it won’t always allow you to select the gear you want and this can prove frustrating at times. 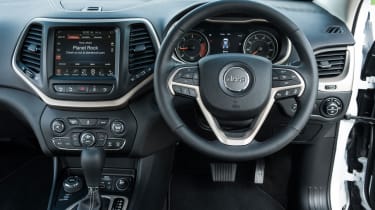 Plant your foot and the Cherokee appears to gain revs without much sensation of speed. Glance down at the dials and you’ll be surprised how quickly you’re going though, and it’ll keep on accelerating well past the national speed limit.

Basic models come with Jeep’s Active Drive I system, which cleverly disconnects the rear axle when not needed to save fuel. However, the 197bhp version is also available with Active Drive II, with a low range setting for improved off-roading. This adds £185 to the price, but doesn’t affect the car’s 2.5-tonne towing capacity.

Refinement is a little off the pace in such a competitive class. The Jeep is rather noisy at idle, but settles down at speed and doesn’t suffer too much on the motorway. A Mercedes GLC is much quieter, though, even on the larger AMG Line alloy wheels.

But it’s the suspension that caused us the most upset. Despite fitting a larger, more powerful engine, Jeep has done nothing to improve the way the Cherokee drives. That means it still fidgets over lumps and bumps in town, yet wallows and rolls over undulating B-roads. It’s a recipe for car sickness and feels sloppy compared to BMW’s X3 or even models like the Ford Kuga and Volkswagen Tiguan. 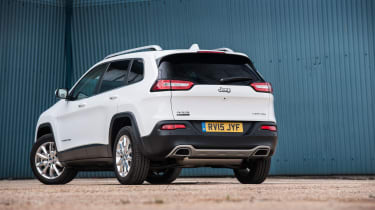 You won’t be disappointed by the extensive kit list, though. This 197bhp engine is only available as a range-topping Limited model (the off-road biased Trailhawk version is reserved for the 3.2-litre petrol V6), while the lower-powered 182bhp car can be had in lesser Longitude and Longitude+ guises.

Our Limited spec car boasted a seven-inch TFT screen between the dials, electrically-operated heated and ventilated front seats, and xenon headlamps as well as larger 18-inch alloy wheels, a power tailgate and keyless go as standard. Jeep’s familiar 8.4-inch Uconnect touchscreen media centre and maps is standard on Longitude+ and Limited cars, too.

Practicality is unaffected, which means the reasonable 591-litre boot is still extendable to 714 litres with the rear seats in their foremost position. While that’s competitive against rivals, fold them flat and the 1,267-litre load bay falls short of the 1,698-litre Land Rover Discovery Sport.