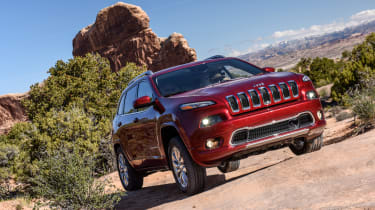 The Overland is a new trim level that sits at the top of the Cherokee range. In some respects, it has the grandeur of the larger Grand Cherokee but in a smaller package. The extra luxuries add a touch of old-school American class but while it looks smart, the Overland version has lost none of the Cherokee’s impressive off-road skills. At the predicted price of around £40,000 it’s expensive, however, and for notoriously brand snobby Brits, the allure of a Land Rover, BMW or Audi badge for similar money may be just too strong to ignore.

Jeep is having a renaissance in the UK. March 2016 was its best month for registrations since August 1997 and the car that’s leading Jeep’s fight back is the tiny Renegade crossover.

Jeep is better known for its large SUVs, though and to make sure its two heavyweights don’t drift into the shadows, there’ll be a facelift for the Grand Cherokee later this year and there’s a new version of the Cherokee. Quite simply, the new Cherokee Overland trim is a posh version of Jeep’s BMW X3 and Audi Q5 rival. 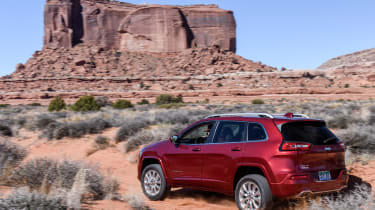 To underline this upmarket positioning there’s a selection of monochromatic paints, the plastic cladding is now body-coloured and there’s a set of polished 18-inch wheels. On the inside the Overland gets heated and ventilated nappa leather seats, plusher carpets, a leather covered dashboard and an Alpine stereo system. The steering wheel is also topped with glossy wood trim that’s strangely not repeated anywhere else in the cabin. Overall, the Overland would look more at home in an Ivy League College car park than the Mohave Desert.

However, it’s still a Jeep and on our seriously tough off-road test route through the mountain ranges in Moab, Utah, the Overland didn’t embarrass itself. Our car had the Active Drive II four-wheel drive system that includes a low-range mode for the gearbox, and apart from the wheels scrabbling on shiny rock and the fear of scratching the gleaming alloys; the Overland was just as adept off-road as the tough Jeep Wrangler. With its cosseting interior, the Overland does feel more at home on tarmac, though – it’s quiet with a comfortable ride, although it’s never thrilling or involving to drive. 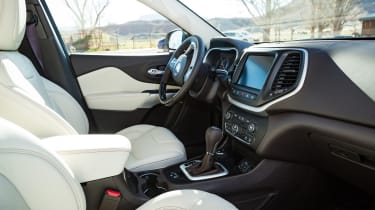 We could only drive the Overland with a smooth 3.2-litre V6 petrol packing 268bhp, but in the UK it’ll come with a 197bhp 2.2-litre four-cylinder diesel and a nine-speed auto ‘box. In other Cherokees, the diesel engine is refined enough while delivering decent shove and respectable fuel economy, but the nine-speed auto can sometimes be a little busy.

Jeep hasn’t priced up the Overland for the UK yet, but it should be arriving around July 2016 costing close to £40,000. At that price, a lot of buyers will be swayed by the Land Rover Discovery Sport as it combines luxury and off-road prowess more convincingly than the Cherokee Overland can.