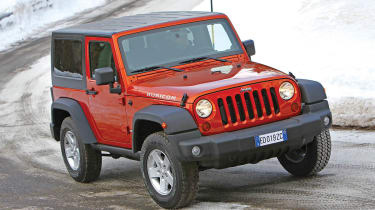 Jeep has done a sound job of comprehensively updating its existing model. And although the Wrangler isn’t the most sophisticated machine on the road, it maintains the classic Willys-inspired styling and legendary off-road ability that fans will love. What’s more, thanks to a variety of small but carefully considered improvements to the engine and interior, it’s a good deal easier to live with. The result is a capable off-roader that now makes a whole lot more sense on tarmac, too.

Advertisement - Article continues below
Chrysler has big plans for Jeep. As the rejuvenated firm attempts to turn around its financial woes, it has specified the Wrangler, Grand Cherokee and Compass as the models it’s concentrating on.
And we’ve driven the first of those to hit UK showrooms.
The Wrangler is considered the classic Jeep, and its exterior is unchanged – much as it has been since its Willys forefather was unveiled 70 years ago. But inside and under the skin, it’s a completely different story.
The interior will be virtually unrecognisable to owners of the existing model. Soft-touch materials now cover the steering wheel, console, grab handles and door pulls. It has automatic air-con and heated seats, and can be ordered with the company’s Uconnect infotainment system.
Advertisement
Advertisement - Article continues below

In general, it feels more like a normal car than ever. Even the boot is updated. A stay holds the side-hinged door open, and there are holes to store the bolts in for when the roof panels are removed.
Advertisement - Article continues below
Improved
The only engine available in the UK is the 2.8-litre turbodiesel, which has also been substantially updated. Economy is improved by up to a fifth – although more significantly, there’s far less noise.
While it’s rattly when cold, and still audible at speed, the unit is nowhere near as intrusive as in the old model. We drove the six-speed manual version – Jeep will also offer a five-ratio auto
– and it featured stop-start, to help slash emissions.
The gearbox doesn’t change very quickly, so to get the best out of it, you have to be smooth and progressive, which suits the character of the Wrangler well.
The diesel has a maximum 410Nm of torque available from 2,000-3,200rpm, and pulls well. Owners can select sixth gear for cruising at 50mph, and still have reasonable acceleration on tap.
In corners, there’s lots of roll, but it never feels out of control and even our short-wheelbase model absorbs bumps rather than skipping between them.
All-round refinement is vastly improved – you can now hold a conversation at motorway speed without having to shout. And the Wrangler remains unstoppable off-road, with heavy-duty axles and short overhangs front and rear. Plus, the classic second lever on the transmission tunnel still lets you switch between two-wheel drive and high and low-ratio four-wheel drive.
Advertisement
Share this on TwitterShare this on FacebookEmail
Advertisement