For the noise it makes and the way it turns heads, there’s a part of the Kahn Vengeance that you just can’t help but fall for – even if the sensible person inside you says it makes no rational sense whatsoever.

It’s hard not to smirk when you first set eyes on the Kahn Vengeance. With its Hannibal Lecter front grille, comically blistered wheelarches and vast 21-inch wheels and tyres, it really is unique.

But that smirk can easily turn into a full-blown attack of the giggles when you discover how much it costs. Take a deep breath: this car costs an eye-watering £400,000. Oh yes, and just to round things off on the “are they serious?” front, its full name is the ‘Kahn Vengeance Green Superhero’.

Its moniker comes from the car’s brief appearance in the Tom Cruise film The Edge of Tomorrow. In terms of credibility, that’s probably magnificent to some people, and of no consequence whatsoever to many others. 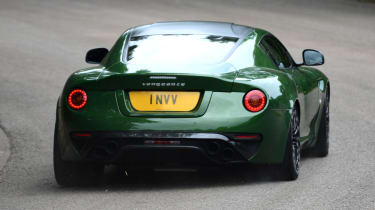 And yet most of the cynicism you might have for the Vengeance disappears into the ether the moment you press the starter button and its Aston Martin-inspired 6.0-litre V12 engines erupts into life. The noise this Kahn makes – courtesy of its bespoke stainless steel exhaust system – is absolutely out of this world.

That’s just on start-up, either. At full chat in third gear the Vengeance sounds like no other road car on this earth. It is cataclysmically loud, and the quality of the sound it makes is quite beautiful; a proper soul-stirring, heart wrenching blend of pure volume – but also a clean, trumpet-like blare in the mid-range that gives way to a fully orchestral scream over the final 1,500rpm. The noise this car makes is enough to make the hairs on your neck go stiff with child-like excitement.

Which is just as well, because to be perfectly blunt and honest, the rest of the car isn’t exactly up to much. The reason why is fairly simple: the Vengeance is based unashamedly on the Aston Martin DB9, or in this particular example’s case, the Virage, which was little more than a tweaked DB9 anyway.

Mechanically, therefore – apart from its exhaust and bigger wheels and tyres – it is entirely unmodified from a DB9. That means, in engineering terms, it is somewhat antiquated to say the least.

On the move the Vengeance feels like a car from yesteryear. Despite boasting a claimed 600bhp (thank the exhaust system for the power increase, says Kahn) it doesn’t appear especially quick. It may sound like it’s doing 200mph just about everywhere, but it never feels that urgent. 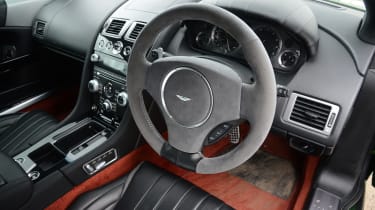 Its steering is heavy and lacks precision, its ride is poor, and its handling is cumbersome beside anything on offer from most contemporary sports and supercars at less than half the price. So in most senses, it makes no sense whatsoever.

Inside, it feels very similar to a DB9, but with some re-trimmed seats and a few extra splashes of restyled leather above the instrument to help justify the exorbitant price. It works, sort of, but the cabin doesn’t feel anywhere bespoke enough for the money.

The exterior, which, despite some wonky panels gaps, manages to heave on your heart strings far more successfully. The Vengeance is built for Kahn Design by the same Coventry-based company that crafted the Aston Martin One-77 – and in the flesh it does look pretty stunning. Not quite £400k worth of stunning, perhaps, but sufficiently different to stand out.