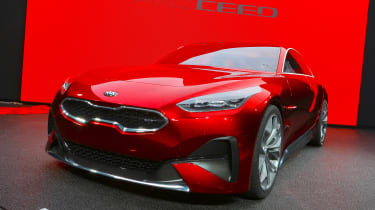 Kia has given us a taste of the next generation Cee’d hatchback with by revealing its new Proceed concept at the 2017 Frankfurt Motor Show. The concept car not only displays a new design language from Kia, but also previews a new shooting brake addition to the Cee'd range.

The low, sleek shooting brake features a steeply raked roofline and flared wheel arches, which contrast with the car's sculpted flanks. Chrome borders the entire glasshouse with a 'sharkblade' c-pillar, giving the effect of a floating roof. It sits on six-spoke 20-inch alloy wheels.

Kia says the concept car represents “extended hot hatch styling” and is influenced in part by the current Pro_cee’d – the firm’s hot hatch. The shooting brake model could potentially replace the three-door Cee'd in the range due to declining sales and the fact that the concept adopts that model's name. 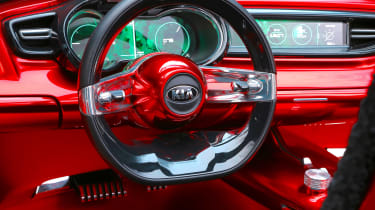 When it arrives the shooting brake will drive Kia into new, more upmarket terriroty, where competition from BMW and Audi will move closer.

We’ve already spied the next-generation Cee’d undergoing assessment by engineers. Auto Express understands that alongside a potential shooting brake Cee’d, Kia is evaluating introducing a jacked up crossover version of its Volkswagen Golf rival too.

Do you think Kia should expand the Cee'd range with new body styles? Tell us your thoughts in the comments below...