The Kia Habaniro concept has been revealed at the New York Motor Show, previewing the look of the next Kia Niro due in 2021 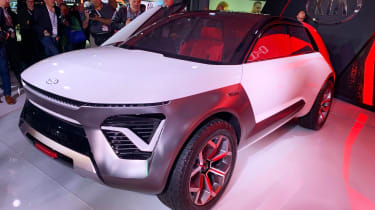 Let’s be honest, the Kia Habaniro Concept’s name gives the game away – this chunky new SUV is a thinly disguised nod towards to the next Kia Niro, which we’ll see in UK showrooms in 2021.

Kia refers to the Habaniro, launched at the New York Motor Show, as an ECEV: an Everything Car Electric Vehicle – a commuter, crossover, sport utility, technology workroom and adventure vehicle.

• All the latest from the 2019 New York Motor Show

Although the Habaniro concept features four butterfly-wing doors that won’t make production, the shape will carry over to the next five-door Niro. Even the contrasting dark grey cladding at the front and the ‘Lava Red’ C-pillar that stretches across the roof could make it to production according to Kurt Kahl, senior design manager at Kia's Californian design centre, and the man responsible for the look of the Habaniro. "It is possible," Kahl told us. "There are certain things in the design that have to stay." 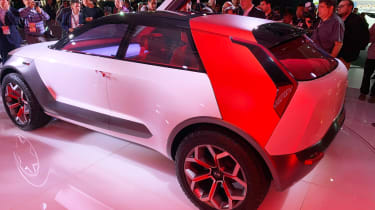 The slim interpretation of Kia’s tiger nose grille, the smooth surfacing and the squarer proportions are also expected to make it onto showroom cars, all helping to differentiate the Niro from Kia’s rapidly growing range of SUVs that also includes Stonic, Soul, Sportage and Sorento as well as the up-and-coming XCeed. The ‘heartbeat’ LED daytime running lights should also feature. "It's a new idea for signature DRLs for the brand," explained Kahl. "The heartbeat represents a humanistic feel to the car."

The concept claims a range of over 300 miles on electric power, but there’s no word on battery size, just that the Habaniro features four-wheel drive with electric motors on the front and rear axles. 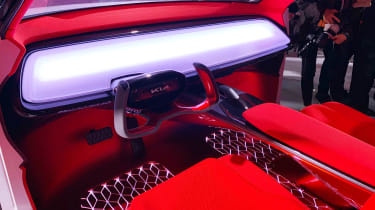 Its length of 4,430mm is 75mm longer than the Niro, while it’s also wider and taller than the current car. The wheelbase has also been stretched, from 2,700mm to 2,830mm, liberating more space for passengers than in the current car. "We've worked on the profile with its speedy upper and rugged lower," says Kahl. "The shark nose front end with its sharp attack angle sets up the shoulder line nicely. Also we didn't want a long hood, but it has to be a certain length - people aren't comfortable with really short hoods although, being an EV, this car could have had one."

As is usually the case with concepts, the wacky interior features are less likely to make it to production. Habaniro does without traditional screens, knobs and buttons, instead projecting information onto a high-definition head-up display that stretches the full width of the windscreen.

A concave instrument panel sits on the dash and acts as a large touchpad using Sensory Light Feedback allowing users to swipe back and forwards to move displays between driver and passenger and to 'throw' them on to the head-up display. "HUDs are moving fast with the technology and we could see some of this make production," said Kahl.

Even the heating and ventilation system is futuristic, evenly distributing air around the cabin, while a soft ambient light is emitted through the geometrically patterned floor.

It will even sense when the driver wants to see what’s happening behind them and automatically activate a 180-degree rear view display, doing away with the need for rear-view mirrors. 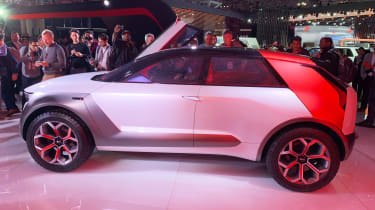 Not that the driver needs to be doing anything other than watching a movie anyway. Habaniro comes with full level five autonomous driving, during which the steering wheel and instrument panel retract to give the driver and front passenger more room.

Kia chose the New York Motor Show to give Habaniro its debut because the car was designed in Kia’s US design studio in California. Kia’s US boss, former Kia UK boss Brit Michael Cole, described the car as, “a genius work of skill and imagination.

“Not only does its beautiful design incorporate the needs of future mobility, but its engineering and technology anticipate the way people will want to move in the near future.”

What do you think of the Kia Habaniro concept? Let us know your thoughts in the comments section below...