The new Kia compact SUV is based on the 2019 SP Signature Concept, however it's unlikely to be sold in Europe 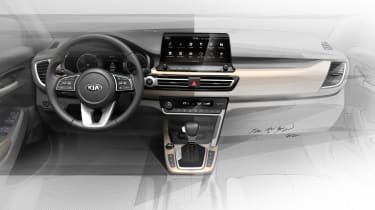 Kia has revealed interior sketches of an upcoming but unnamed compact SUV, which goes on sale in Korea this year and other markets at a later date - but a European launch looks doubtful.

The new model will feature an all-new interior design scheme making use of a bold set of central vents and a large floating touchscreen infotainment system measuing 10.25-inches in size.

Kia says the new model is designed to appeal to the “millennial generation”. The new model, which in essence will be the 2019 SP Signature Concept in production form, is unlikely to be sold in Europe, but shows us a preview of the styling direction of future Kia models. 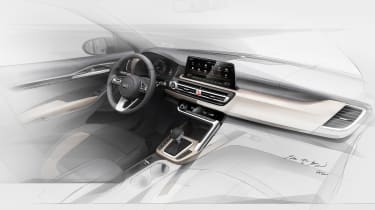 Sitting somewhere between the Stonic and the Sportage in terms of size, the new model has an altogether sharper and much chunkier appearance than either according to teaser sketches. Although the sizing will be similar, this is a different model to the Kia Ceed based XCeed crossover that Kia is expected to reveal at the 2019 Frankfurt Motor Show.

The image of the car’s face shows the latest iteration of the brand’s ‘tiger nose’ grille - here seamlessly merging into a set of LED headlights with three-dimensional lighting elements. Below it, the front bumper features three intakes, taking on a sharper interpretation of the design used by the existing Sportage. 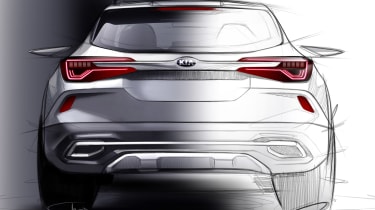 The rear view image shows Kia moving away from the full-width light bar that’s used on so many of its models. Instead, a chrome strip housing the Kia logo intersects the two C-shaped lighting units.

While we’ve seen no official images of the production model, the concept shows us that there will be a bold shoulder line, bold wheel arch cladding, and a window line which kinks upwards towards the rear in a manner slightly reminiscent of a SEAT Arona.

Speaking about the new model, Kia’s head of Styling Byung Chul Juh noted; “we have created a car which stands out everywhere, from the city to the countryside. Its robust yet sporty design will be matched by a wide range of features and technologies that are universally suited to younger buyers in markets around the world. Our new small SUV is a proposition that no other car in its class will match.”

The new model is set to be officially revealed in the summer, with South Korean sales starting in late 2019. Other markets will follow later, though there are no plans to bring it to Europe or the UK.

Click here for our list of the best small SUVs and crossovers on sale in the UK...