SECOND REPORT: Our three-door Pro_cee’d is a bit of all-white! 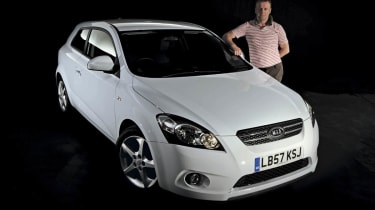 Some things are just black and white. Take the fashion for white cars – the last time they were popular was in the Seventies. Most trends come back at some point, and our long-term Kia Pro_cee’d is a prime example. It’s one of a growing number of new models that looks great in white.

So where does the black come in? Well, not since the fuel crisis of 1973 have we seen such a global panic about fuel prices. So while editor in chief David Johns has concerns about his Mercedes C-Class’ diesel bills (Page 46), I think the fact that our Pro_cee’d drinks from the black pump is an added bonus! I can get around 400 miles on a single tankful if I take it easy with the throttle, and for a 2.0-litre sports hatchback, that isn’t bad.

Truth be told, most people are more concerned with mpg than bhp these days. And if that sounds dull, don’t be put off, because trying to get the Kia’s trip computer to the highest possible average fuel economy is my latest pastime.

I’ve managed to reach 43.9mpg on a long trip up north. But I was frustrated when Auto Express columnist Mat Watson borrowed it for a week and managed to beat my best efforts. He hit 44mpg – so I’ll be doing my utmost to better that figure!

This might be a hard task in the current hot weather, as the air-con is usually cranked up to keep the cabin cool. And that’s no easy job thanks to the black leather interior.

At least the Arctic White paint means it doesn’t get roasting hot when I leave the Pro_cee’d parked in the sun. Better still, I’ve also discovered the glovebox can be cooled by redirecting the air-con into it. It works as a useful cool box to keep drinks chilled. Another thing I’ve noticed is just how long the doors are. That’s brilliant for letting people into the rear seats, but when I’m parked in a tight space, getting in and out isn’t easy.

I often find myself trying not to bash the doors against a wall or, worse still, another vehicle. I suppose that’s a sacrifice you have to make for the car’s styling – and the Kia does look great.

The rakish tailgate also disguises a decent 340-litre boot, so it’s practical, too, and has taken plenty of luggage on weekends away. Let’s just hope I continue to enjoy the rest of the year with the Kia – and that it doesn’t get any black marks in its logbook...