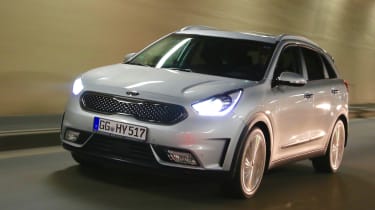 Even this early pre-production Niro showed plenty of promise as an appealing, eco-friendly family car. It looks better than many other hybrids on the market and comes with a hugely usable and spacious interior. Running costs should be attractive, but not as much as the expected price. The Niro could be the start of a whole new appeal for hybrid cars.

It's going to be a very green 2016 for Kia. The Korean car firm will be introducing two hybrid models - the new Optima plug-in hybrid, and this, the Niro, which is set to tackle the Toyota Prius. And just a week after the car's global debut at the Chicago Motor Show, Auto Express was invited to drive the Niro alongside Kia Europe CEO Michael Cole.

Kia describes the Niro as the first Hybrid Utility Vehicle, or HUV - offering more than just a regular hybrid car. But Cole has another take on it. "It's a crossover first and foremost," he says. "But it's a crossover with the added bonus of being a hybrid."

And the further bonus of being sensational value – Kia is aiming for a price that doesn’t tread on the toes of the newly launched Sportage SUV, so expect it to start at less than £18,000.

To put that into context, you can’t get a new Prius for less than £23,000, while even the Toyota Auris Hybrid costs over £20,000. And as usual with Kia, this will be no stripped-out model. It’s got interior space that’s comparable to the Prius and a big boot, too. Plus, the seven-year warranty outstrips Toyota’s cover by two years. 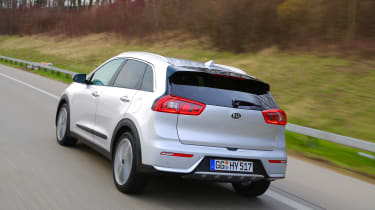 Kia’s offer of a drive in an early car was all the more bold with a route from the company’s base near Frankfurt in Germany down to Geneva in Switzerland. Previous experience of hybrids shows they’re most efficient in town rather than on long cross-country jaunts. So how did the Niro fare?

Our route was mostly motorway with a bit of town driving thrown in and some fairly hilly stuff, too, yet the Niro managed 60mpg – not bad in the real world and not too far off the expected average claim of 73.6mpg.

Kia has also eliminated the Achilles’ heel of many hybrids by fitting a six-speed dual-clutch box rather than a continuously variable auto – it makes for a far more normal drive, even if response is still a little sluggish. 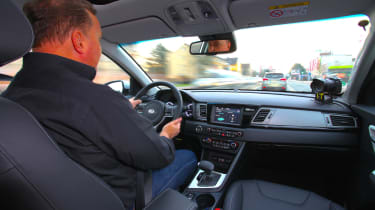 We detected slight hesitation as the car’s brain decided whether to use the electric motor or engine or both to pull away, but that’s likely to be smoothed out in production versions. The brakes could do with a bit of work, too, for a less abrupt and more linear feel, although again, there’s time to tweak before cars arrive in the summer.

The Niro gets more advanced battery tech than the Prius, using a lithium ion polymer set-up that will enable it to travel for up to three miles on electric power alone at speeds of up to 70mph. And true enough, on a light throttle travelling downhill, the engine was off and the on-screen graphics showed the battery and electric motor doing the work.

The transition between battery (eerily silent) and engine power (still quite quiet) is seamless on the move with no vibration as the swap takes place. You can hear the engine’s hum when it’s working, but the Niro is a relaxed and refined drive. 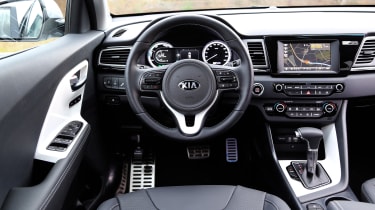 It’s not a car you’ll want to throw through corners, while the ride can be a little bobbly, although our car was on the bigger 18-inch wheels – smaller 16-inch wheels may prove more comfortable. Similarly, the steering doesn’t offer bags of feel, but it’s direct enough.

The crossover design eschews the now traditional teardrop shape of hybrids like the Prius, as well as the Niro’s Hyundai Ioniq sister car (with which it shares plenty of its running gear); it’s not a full-on SUV look, but it’s a crisp, smart shape livened up by some cladding around the wheelarches, skid plates front and rear, and an interesting spoiler at the back.

Inside, the car is as well built as we’ve now come to expect from Kia, with better-quality plastics than in the latest Prius and a smart, easy-to-use layout. Even the indicators clicked with a quality sound. 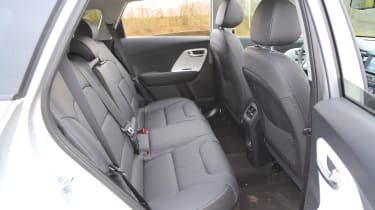 The powered driver’s seat of our test car was a fair few millimetres too high for us, leaving our head irritatingly brushing the headlining around the sunroof. Again, Kia tells us this will be sorted for production.

There are no such problems in the back, with space for a couple of adults to stretch out in, or three kids to argue over the middle seat. The boot’s a good size and shape, and easy to get at, too; cabbies and their passengers are going to love this car.

As well as all the latest safety gadgets – like autonomous emergency braking and lane keep assist – the Niro gets Android Auto for connection to smartphones (there’s no Apple CarPlay yet). It also features a navigation system that lets the hybrid drivetrain know what the road ahead is like so it can maximise efficiency. 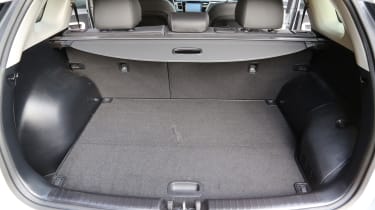 Ultimately, that efficiency is limited by the crossover shape of the Niro – it’s not as slippery as the Prius so mpg will be lower and CO2 higher than the Toyota’s. But the figures we achieved were pretty good and that likely starting price will go some way to making up for it.

Michael Cole told us Kia had originally estimated around 20,000 annual Niro sales across Europe, but is thinking about revising that figure to closer to 40,000. We think that could be a wise move – Kia could have a hybrid hit on its hands.