Don't be fooled - the Picanto is not a fiery new spicy sauce for chilli lovers. Rather, it's the long-awaited replacement for the Kia Pride city car, and it's going to spice up the Korean company's showrooms when it arrives here in May. 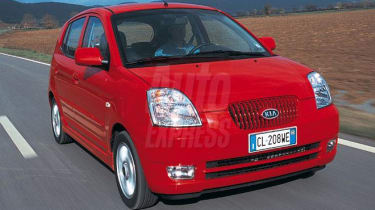 Kia's first supermini since the Pride is a fine effort. The Picanto is well equipped, competitively priced and - the gruesome grille aside - neatly styled. But it falls short of the Fiat Panda as it lacks the Italian contender's brilliant combination of driver appeal, packaging and character.

Don't be fooled - the Picanto is not a fiery new spicy sauce for chilli lovers. Rather, it's the long-awaited replacement for the Kia Pride city car, and it's going to spice up the Korean company's showrooms when it arrives here in May.

It's the prices that will be really hot, though. Kia has yet to announce how much the newcomer will cost, but expect it to be fighting for the title of Britain's cheapest car, with entry-level models starting at around £5,500.

Even with a bargain-basement price tag, the Picanto is entering a fiercely competitive sector of the new car market. Look no further than the award-winning Fiat Panda, the entertaining Daihatsu Charade and the dynamic Ford Ka. Each of these superminis combines wallet-friendliness with decent equipment and lively characters. So the Picanto is going to have to be pretty impressive to notch up the 6,000 sales Kia is predicting this year.

And, by and large, it is. With its pert rear end, creased flanks and bold headlamps, the Kia certainly looks the supermini part. What a shame, then, that its lines are spoiled by an unsightly grille.

The new baby is based on the same platform as the Hyundai Getz (Hyundai and Kia are automotive partners), albeit one that has been shortened and narrowed to endow the Picanto with its small, urban-friendly footprint.

Buyers have two four-cylinder petrol engines to choose from: a 60bhp 1.0 and a 65bhp 1.1-litre. Our car featured the latter, which sends power to the front wheels through either a five-speed manual or a four-ratio automatic transmission. Oil-burning fans will have to wait until the end of 2005, when a 1.1-litre three-cylinder turbodiesel unit will join the line-up, putting out 70bhp.

First impressions of the Picanto are good. The level of equipment on offer is pretty generous, with two front airbags, ABS with electronic brakeforce distribution and a radio/CD player all included as standard.

What's more, the cabin is spacious enough, the fit and finish of the plastics are acceptable and the dashboard is clearly laid out. The high-set driving position and large expanses of glass make for good all-round visibility, and accommodation is reasonable whether you choose the four or five-seat version of the car. At low speeds, the Picanto is simplicity itself to drive as well - the clutch, gearlever and steering are all light, the engine responds briskly to throttle inputs and the supermini can be hurried along with ease.

However, when compared to any of its Fiat, Ford or Daihatsu class rivals, the newcomer is only impressive up to a point. You see, the Kia never really brings a smile to your face. Out on the open road, there's not much of the sparkle the styling promises.

The engine seems to lack genuine enthusiasm, the steering feels disconnected and the ride quality is inconsistent, with the vehicle floating over undulations, but banging and jarring over ruts and ripples. That means there is little real pleasure to be derived from the Picanto, for both driver and passenger. The Charade's gusty three-cylinder engine leaves the Kia's powerplant feeling a little wheezy and short of breath, and the Ka's taut handling shows up the Picanto's unbalanced ride quality. Meanwhile, the intelligent packaging solutions of the Panda make the newcomer's split-folding rear seats seem a little unimaginative in comparison.

On the whole, though, the Picanto makes a decent enough fist of things. However, this is a car that will appeal to the wallet rather than the head. So before you walk into the local Kia main dealership, make sure you have taken a long, hard look at what else is available in the supermini sector - you might then just change your mind.