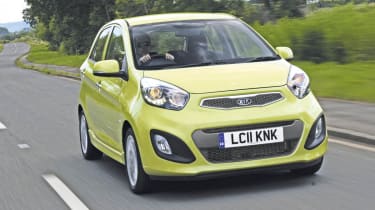 The new Picanto represents another huge step forward for the Korean brand. Thanks to its quiet and comfortable nature, it’s perfectly suited to city driving, while we can’t find much to fault inside or out. For us, though, the pick of the range is the EcoDynamics model, which is just as good  to drive as the top-spec 3 and has nearly as much equipment for less money. Plus, stop-start means it’s cheaper to run, too.

We’ve had our eye on the new Kia Picanto for a while now. An early example impressed when we drove it in Korea, and so did the eco model we tried in Issue 1,167. But how does the city car cope on UK roads?
It’s had quite a transformation from its unassuming predecessor. There’s chunky styling inspired by the Korean firm’s bigger models, and the strong family grille from the Sportage crossover.
Video: watch CarBuyer's video review of the Kia Picanto
[[{"type":"media","view_mode":"content_narrow","fid":"68674","attributes":{"alt":"","class":"media-image"}}]]
Our top-spec 3 model is helped by a smart set of 15-inch alloys, chrome door handles and neat LED lights front and back. All this makes the Picanto seem like a far bigger car.

Climb aboard, and you’re greeted by a well made and attractive dashboard, with all the major controls within easy reach. The leather steering wheel mimics the grille’s shape, too, adding character to the slightly plain layout. The lack of reach adjustment is annoying, especially on a top-spec model, but finding a comfortable driving position is still straightforward.
Expensive kit such as heated seats, a Bluetooth connection and a six-speaker sound system are included as standard, adding to the grown-up, premium feel. However, it’s the way the Picanto drives that impresses most.
For such a compact car, the ride is incredibly composed and soaks up bumps and potholes with relative ease. Around town, the 1.25-litre petrol engine is smooth and refined, and despite having only 84bhp on tap, the Kia is quick enough to meet most buyers’ needs. It also returns just over 60mpg combined.
The well weighted controls, particularly the light steering and quick gearchange, make the car very easy to drive, and tackling tight manoeuvres is no hassle. It doesn’t offer the eager handling of, say, the Suzuki Swift, but it reacts quicker to your inputs than the Nissan Micra or Toyota Aygo.
The Kia is not perfect, though. The kit list and bold styling might be from the class above, but you would struggle to fit more than two passengers in the narrow back seats. Plus, the 200-litre boot can carry only a few small bags – even if it is an improvement over the previous model’s.
All new Picantos with the less powerful three-cylinder petrol unit sneak below the £10,000 barrier. But at £11,195, this top-spec car looks pricey, especially as the base version is more than £3,000 less.
Share this on TwitterShare this on FacebookEmail