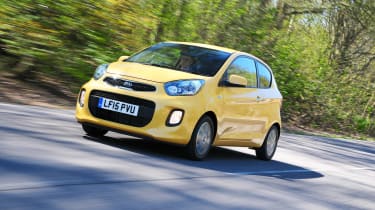 The SR7 version of Kia’s facelifted Picanto city car adds some sporty styling touches and a few must-have features. But even this updated urban runaround can’t match its competition, such as the spacious Hyundai i10 and well-packaged, stylish Skoda Citigo.

Fitted with Kia’s 1.0-litre three-cylinder petrol engine, the Picanto SR7’s performance might not match its sportier image, but this is a city car, so acceleration and speed take a back seat compared to efficiency.

With 68bhp on tap, there’s still plenty of poke to zip through busy urban traffic, but it’s the quoted 67.3mpg and 99g/km CO2 emissions that are more important, making the Picanto road tax free and cheap to run.

SR7 spec is available in three- and five-door form, but if you want the extra practicality from the pair of rear doors you’ll have to pay £200 more. Boot space stands at 200 litres, and although there isn’t much space between the boot lid and the rear seats, the luggage area is deep, so you can fit a surprising amount in.

Fold the back seats down and there’s 605 litres to play with in the three-door and 870 litres in the five-door – although these figures are a lot less than the roomy Hyundai i10 and even the rear-engined Renault Twingo. 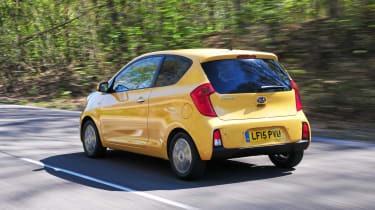 A very mild facelift in 2015 means you’ll be hard pushed to pick out the new car from its predecessor, but with a sharp overall design the Picanto still looks stylish thanks to Kia’s trademark tiger nose grille flanked by bold headlights. There are some gentle lines down the side of the car to add extra visual interest, while at the back – like the front – the rear bumper has been lightly updated. 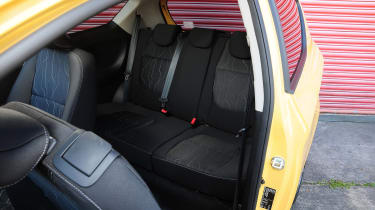 On top of this the Kia drives sweetly. You have to rev the engine hard to make progress on the motorway, so it’s better suited to around-town driving. There’s little steering feel, but nice weighting and a short wheelbase means the Picanto is still fun to drive.

However, with not much space between the front and rear wheels, it does mean the chassis is affected by bumps. Ride comfort is good on most surfaces, but big potholes or broken tarmac do unsettle the Kia.

Overall, if you’re after a cheap city car that blends running costs with essential equipment, the Kia Picanto SR7 is worth a look. However, there are more convincing alternatives on the market.