Can Kia's compact family hatchback be sporty as well as practical? We drive the three-door for the first time. 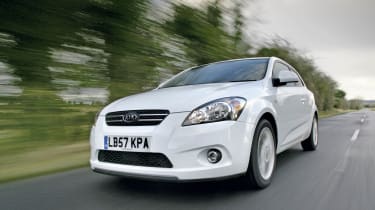 Concepts such as the stunning Kee have shown that design is high on the agenda at Kia. While the coupé is still some way from production, the Pro_cee’d is here now – and it will undoubtedly boost the brand’s image. Aswell as being good to look at and decent to drive, it comes with lots of kit and a warranty package Ford and Vauxhall can’t match. Overall, Kia has createda sporty, stylish hatchback that represents excellent value.

It's time for Kia to think sexy! The Korean firm made its name building practical and affordable cars, but here is something that might change its image a bit: the new Pro_cee’d.

It’s a three-door version of the five-door Cee’d launched last year, and the company’s sportiest model yet.

Prices start from £11,795, which puts this latest model on a par with the five-door – usually, three-doors cost less. But Kia says the fresh look, on top of the standard seven-year, 100,000-mile warranty offered across the Cee’d range, makes the newcomer excellent value for money.

In common with Vauxhall’s three-door Astra, the Pro_cee’d distances itself from the five-door by having a totally redes-igned body. It’s longer and lower, and features a steeply raked windscreen and swooping tail. In fact, the only panels shared with the Cee’d are the front wings and bonnet.

Inside, the cabin has been lifted straight from the five-door. Material quality isn’t quite as good as in a Ford Focus, yet everything is clearly laid out and neatly styled. It’s well equipped as standard, too, with a USB port for iPods and air-con on all models.

Access to the rear is tight, even though the front seats slide forward and automatically return to their original position. There’s really only room for small adults and children in the back, but the boot is spacious and the rear bench has a 60:40 split. What’s more, the backrests fold flat without the head-rests having to be removed.

Engine choices comprise 1.4 and 1.6-litre petrol units, as well as 89bhp 1.6, 113bhp 1.6 and 138bhp 2.0-litre diesels. Pick of the bunch is the mid-range oil-burner. This returns 44mpg, yet delivers smooth and torquey performance, along with relaxed cruising, despite the fact it only comes with a five-speed manual gearbox.

To make the Pro_cee’d feel a bit sportier, Kia has uprated the anti-roll bars and dampers. The result is that the ride is firmer than in the Cee’d – so much so that it can be uncomfortable on rough surfaces. The steering could do with more feel and weight, but that aside, the Pro_cee’d handles precisely with lots of agility.

Officially, there are no plans for a hot hatch version to be powered by Hyundai’s 2.0-litre turbocharged petrol engine, which is a shame. For now, though, the Pro_cee’d is set to be a hit for Kia, combining the manufacturer’s traditional value for money and build quality with real style.