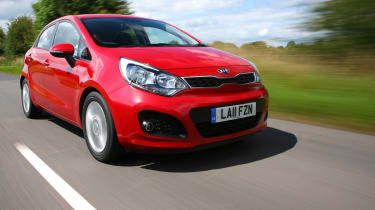 Never considered a Kia supermini? This is the car that should change your mind. It’s a big step forwards in quality, genuinely well built, efficient, competent on the road, competitively priced and comes with a first-class aftersales package. While perhaps still lacking some of the extrovert flair of the city that shares its name, it will be a thoroughly sensible choice for thousands of buyers and deservedly steal sales from some of the more established names on the market.

Calling your car Rio is a bold statement of intent. It suggests a certain sort of glamour that the Kia supermini has never been able to live up to – the outgoing model was more Cleethorpes than Copacabana, and labelled as “boring” by none other than the Korean company’s design boss Peter Schreyer.
Now a new model has hit Britain, with some heavy expectation. As the firm’s fifth new car in 18 months, it’s charged with repeating the success of the likes of the Sportage and Picanto and increasing sales to 12,000 a year from 2012. Auto Express took the wheel of one of the first models to arrive in Britain to see if Kia’s optimism is justified.

Video: watch CarBuyer's video review of the Kia Rio
[[{"type":"media","view_mode":"content_narrow","fid":"68694","attributes":{"alt":"","class":"media-image"}}]]
It certainly gets off to a strong start, as it’s undeniably a more attractive car than the model it replaces. The company’s now familiar bow-tie grille remains in place, but the front doesn’t appear quite as aggressive as on the smaller Picanto. Schreyer’s stated aim is to ensure his firm’s cars are recognisable as Kias, but not all alike, and the Rio fits that brief perfectly.
Inside there's a significant leap in quality. Decent plastics are used, it all feels solidly constructed and the mid-range 2 spec car we drove came well equipped with the likes of air-con, leather trim on the steering wheel and a cooling glovebox. In terms of quality, it’s on a par with the Toyota Yaris and Renault Clio it's apparently benchmarked against.
There’s plenty of space, too, with the company claiming class-leading head- and legroom in the front, while three adults will comfortably fit in the back. Even six-footers will have no problem getting comfortable behind the wheel. Boot space, at 288 litres, is competitive with the Ford Fiesta (295).
What about the driving experience, though? Kias have occasionally been criticised for being ‘white goods’ cars, bought for functionality rather than fun. Does the Rio address this?
Well, in terms of handling it’s a still a way short of the Fiesta. But the reality is this will not be a concern for most. We drove the six-speed manual 1.4-litre petrol, likely to be the big seller, and it pretty much ticks every box for the vast majority of potential buyers – the 107bhp engine provides adequate performance, the suspension copes with Britain’s potted roads well, the gearbox feels solid with well spaced ratios and it resists roll reasonably well. As superminis go, it’s refined, too, while claimed economy of 51.4mpg is respectable.
The lifeless steering still fails to convince, though. It was a noticeable issue on the early production model we drove in Korea in July and although the problem was not quite so marked on the UK car, it still detracts from the package. Again, though, this is unlikely to deter too many.
With another petrol engine on offer (an 83bhp 1.25 petrol) and two diesels (a 74bhp 1.1 and 89bhp 1.4), there’s enough choice for most, and with the focus firmly on efficient motoring – all manual versions of the car are tax-free in the first year – the Rio is a thoroughly appealing option for cost-conscious buyers. The 1.1 diesel, fitted with EcoDynamics stop-start, is the cleanest non-electric car in the world, emitting just 85g/km of CO2.
It’s competitive on price, too. This 1.4 2 model is £13,095, but available for £750 less for early buyers in September. That will make it £2,250 cheaper than a comparable Ford Fiesta and £250 less than a similarly equipped Hyundai i20.
Add in the company’s seven-year warranty plus a £259 package for the first three services and the Rio is sure to make a lot of sense for a lot of people, and rightly so.
Share this on TwitterShare this on FacebookEmail