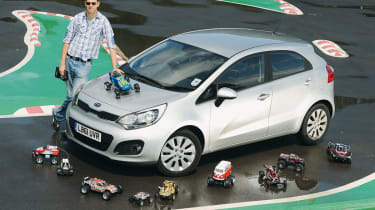 I have to admit our Kia Rio wouldn’t be my first choice of car for a day at a race track. But I wasn’t visiting Silverstone or Brands Hatch; instead I was at a scaled-down arena to test radio-controlled cars, and here the Rio was in its element.

For starters, with the rear seats folded, the large boot easily swallowed all 12 RC models. In fact, the practical five-door Kia is fitting in well with my role as products writer.

One thing I’ve noticed is the rooflining is dented and scuffed – probably from when I tried to cram in bike racks for a recent product test. But the bits of the car I see day-to-day – the dash, centre console and steering wheel – are robustly built and have a classy look and feel.

As a self-confessed gadget geek, I’m starting to love the technology in the car as well. The steering wheel controls for the stereo are great, and not only does the Rio have an excellent hands-free function, I’ve discovered I can also use the Bluetooth system or the USB cable to play music on my iPhone. The stereo handles audio apps – so I can listen to playlists on music streaming service Spotify on the move.

I’ve been impressed with the driving experience, too. The Rio handles impressively well on twisty tarmac, turning in quickly and responding positively to steering inputs. However, the ride is a little firm and uncomfortable, especially over the speed bumps and potholed surfaces I encounter on my commute.

The 1.1-litre diesel engine and six-speed gearbox have been tuned for economy, not performance, and the Kia takes more than 16 seconds to get from a standstill to motorway speeds. It doesn’t like overtaking manoeuvres when cruising along, either, so you really need to work the engine hard to make progress.

Even so, fuel economy has risen to 43.1mpg – from 36.3mpg in my last report. But that’s still nowhere near Kia’s claimed 78.5mpg. I reckon the addition of cruise control might help improve my figures, but it’s not an option for the Rio 2 – you only get it on the more powerful 3 model.

Still, the Rio’s range isn’t as bad as the RC cars I tested; they wouldn’t have made it out of my cul-de-sac before running out of battery. The Kia is a sensible choice, blending style, value and space. I’ll stick to getting my track thrills with miniature cars.

“On a recent commute, I tried to match Kia’s official economy, but couldn’t get anything above 50mpg without feeling like I was a danger to other drivers.”Luke Madden, Web reporter

“I got my Rio 1.1 in December. Overall, I’m very pleased, but I’ve averaged only 44mpg over 3,500 miles. Like you, I’m hoping to see an improvement.”Peter Wallbank, via www.autoexpress.co.uk