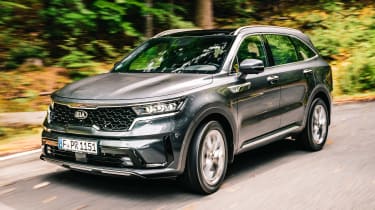 Kia seems to do very little wrong these days. The latest Sorento remains the practical, comfortable and safe family SUV that it has always been, but it’s now packed with tech you won’t find anywhere else. It also looks better than ever and, although its price is creeping into genuine premium territory, it’s a difficult package to fault. We look forward to a UK test.

Welcome to the all-new Kia Sorento. This seven-seat Korean SUV has long been one of the best-value, most family-friendly SUVs around, and this fourth-generation model is now on sale in the UK with a lot of expectation on its shoulders.

Thankfully, Kia is on a roll at the moment and its designers have come up with a pretty handsome-looking SUV. In 2002, the Sorento looked like a Mercedes ML replica, but the car has evolved over the last 18 years and this latest version is certainly the most ‘premium-looking’ of the lot.

It’s based on a new monocoque chassis and, although it’s only 10mm longer and wider overall than the outgoing model, the wheelbase has grown by 35mm.

Our first taste of the new Sorento comes in Germany in a late prototype, but the SUV has already gone on sale in the UK priced from £38,845. Initially there are only two powertrain options to choose from: a 226bhp 1.6-litre petrol hybrid and the 199bhp 2.2-litre diesel unit that we’re driving here. Later down the line a plug-in hybrid version will also join the ranks for those looking to minimise fuel bills. 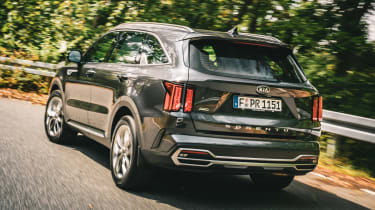 But this torque-rich 2.2-litre diesel feels like a good fit for the Sorento based on our time with it, and as standard the engine is paired with an eight-speed automatic gearbox and four-wheel drive.

Engine noise is pretty well suppressed when you fire it up; you aren’t greeted with the rough, diesel clatter you’d usually get from such an engine. Pull away and 440Nm of torque is available almost immediately, so there’s enough shove to get you from 0-60mph in 9.1 seconds, which is a decent showing for a car that weighs in excess of two tonnes. That strong low-down grunt also means the Sorento will be able to tow up to 2,500kg – that’s half a tonne more than the outgoing model.

It’s also immediately obvious that the new Sorento has been set up with comfort and refinement in mind; the SUV does roll noticeably through the corners, but then you’d expect it to – it’s a seven-seat SUV. However, the steering has a nice weight and is very accurate, which gives the car a real sense of solidity on the move. The ride is well controlled, the engine is hushed and, if we were to close our eyes, we could well believe we were driving something more ‘premium’ and German. That’s not something you could have said of a Kia five years ago.

And off-road? Kia has redesigned the ‘terrain mode’ system, and now there are driving programs for snow, mud and sand. The powertrain then automatically adapts to the ground it’s on to help maximise traction and keep you moving.

And the good news keeps on coming, because the cabin technology and the quality inside the new Sorento are even better than they were before, too. 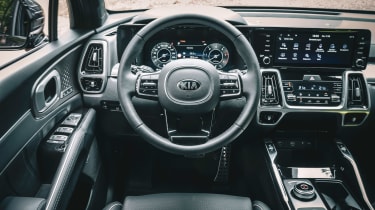 The overall design perhaps isn’t as well executed as the exterior – the aluminium surrounds of the air vents do look a little cheap – but everything else you see and touch is of high quality. The infotainment system is nice and slick, and happily Kia hasn’t integrated the climate control settings into its new touchscreen, instead fitting physical buttons beneath it. It’s not the prettiest cabin, but it’s designed with ease of use in mind; there are even seven USB ports inside, one for every passenger.

The amount of tech on board is also mightily impressive. The Sorento is the first car on sale to feature a new blind-spot monitoring system that projects an image of rear traffic onto the digital instruments, so you can see exactly what’s in your blind spot. Clever.

Parking worries will also be a thing of the past because the Sorento can park itself; drive up to a spot that’s too tight and you can use the key fob to slowly move the car forwards or backwards from outside. There’s also a plethora of other safety kit, such as automatic emergency braking, adaptive cruise control and speed-limit recognition.

Kia certainly hasn’t skimped on safety, then, or indeed practicality. This Sorento is ever so slightly larger than before and, while it’s not immediately obvious inside, there’s still acres of space up front and in the back. Seven seats come as standard, and you can even squeeze adults in the rearmost seats – although they probably won’t want to be spending too much time back there.