The new Kia Sorento 7-seat SUV is capable of taking the fight to premium brand rivals from Audi, BMW and Land Rover 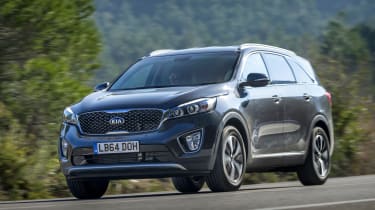 The new Kia Sorento is a big step up over the old model, feeling more sorted in near enough every area. It’s good to drive, hugely spacious and comes loaded to the brim with standard kit. Top-spec models are expensive though, and in all honesty, this well-equipped KX-2 will suit most buyers.

Over the last decade Kia has gone from low budget cheap and cheerful, to a genuine mainstream market contender with a broad model portfolio. The third-generation Sorento is its latest new model, with sights set firmly on premium-sector cars like the Land Rover Discovery Sport, BMW X3 and Audi Q5.

It looks smart, too, with a tidily designed rear and an imposing front end. Inside it’s a big step up over the old model, with plenty of plush materials and a chunky leather steering wheel on all cars. It’s not a patch on the Q5, but it’s a seriously solid effort and should stand up to the rigours of family life. 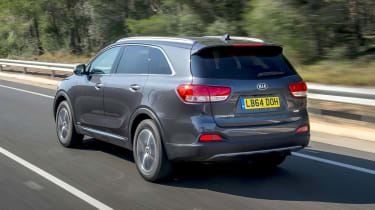 There’s no hiding the car’s bulk though, and it can feel quite intimidating to drive around town. The light steering makes parking a bit easier – as does the reversing camera on KX-2 models and above – but step up to KX-4 and you’ll benefit from a Nissan-style Around View Monitor. This adds a plethora of cameras designed to give ultimate visibility when manoeuvring.

Out on the open road the Sorento is quiet and refined with only slight wind whistle from the A-pillars and door mirrors at higher speeds. Considering this is a big car, the suspension does a good job of keeping body roll in check on twisty roads, and it’s well cushioned on the motorway. However, despite getting Kia’s Drive Mode Select system – which offers Normal, Sport and Comfort steering modes – we found it made little difference as we started to push on, leaving us wanting a little more weight and increased feedback in the tighter bends. 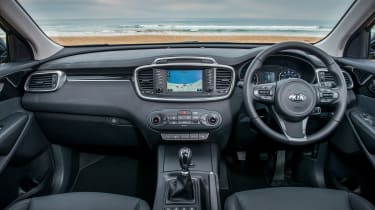 UK buyers only get one engine option – a 197bhp 2.2-litre diesel. It felt punchy two up, but we’ll have to wait and see how it copes with four, five or even seven people on board. Kia bosses confirmed there’s no plans for bigger (or smaller) engines in the foreseeable future.

Fuel economy isn’t bad, though, with manual models returning between 46.3mpg and 49.6mpg depending on wheel size. Automatic models are slightly thirstier, and cost around £1,750 more. We had a quick go, and while the six-speed auto is no slouch, the manual feels more responsive and suits the car much better.

As mentioned, all UK Sorentos get seven seats, with a sliding middle bench for more leg or boot room. As with many cars of this type, the two rear chairs are for kids or really occasional use – but they fold flat into the floor and will no doubt come in useful for busy families. 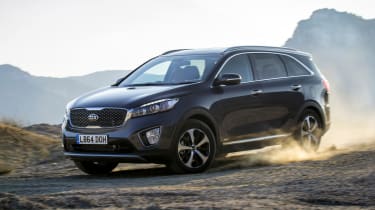 With those seats folded the Sorento gets a 605-litre boot, which although large, is somewhat short of the Discovery Sport’s 981 litres. That said, it almost matches it with all the rear seats down, posting a figure of 1,662 litres versus the Disco’s 1,698 litres.

There are loads of cubbies, and there’s even a neat underfloor storage compartment in the boot that houses the retractable parcel shelf when the third row of seats are in place. Passengers in the rearmost chairs will value the separate air-con dials, too, making the cramped journeys a little more bearable.

It’s this KX-2 that should steal the majority of Sorento sales in the UK. It comes with a great kit list and represents decent value compared to its rivals. The flagship KX-4 boasts luxury-car features such as heated and ventilated front seats, TFT dials and a huge panoramic sunroof – but that costs north of £40,000 – and in our eyes doesn’t represent enough of a step up to justify the £10k premium.