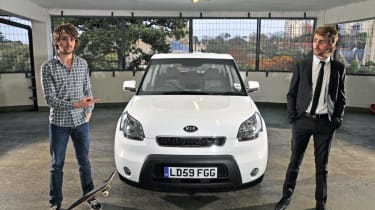 The Kia Soul has a split personality!

I’ve recently taken delivery of our new long-termer, and it’s proving to be a car of contrasts. On one hand, its trendy styling, off-road looks and chunky detailing are aimed at younger drivers. On the other, our car’s monochrome colour scheme and frugal diesel engine give it grown-up appeal.

So, whether I’m heading to a photoshoot for the magazine or hitting my skateboard, the Soul fits the bill perfectly.

The Kia’s gleaming white paintwork is sure to keep me busy with a bucket and sponge, too. However, at least I won’t be visiting fuel forecourts too often, as the economical 1.6-litre diesel powerplant means I can now go further between refills than I’m used to.

The Soul has replaced my quirky Daihatsu Materia. Although both cars are genuine head-turners, that’s where the similarities end. While the boxy Materia is essentially a city car, the Soul is a jacked-up supermini, so it’s bigger both inside and out.

The extra space brings added practicality and the interior quality is a step ahead of your typical smaller car. Everything feels more substantial than I’m used to, and the cabin features the kind of kit you expect in much bigger machines. Top of the list is the stereo, which will appeal to everyone from trendy teenagers to mums and dads.

Its USB port means I no longer have to cart my music collection around with me. I simply plug in my MP3 player to access my favourite tunes through the car stereo. I don’t even need my separate 12-volt charging lead, as the USB connection makes sure my iPod stays charged at all times.

So far I’ve already driven 5,582 miles and the Soul has returned 46.1mpg. But it’s not only the Kia’s economy that makes it such a welcome addition to our fleet – it’s the performance of its engine that really sets it apart from my previous long-termers. The 1.6-litre diesel provides strong performance on motorway trips, and this is where I spend most of my time, travelling to various locations to snap pictures for the magazine.

And if you’re not a fan of the Soul’s off-road looks, you only have to climb inside to see the benefits. Its tall body creates an airy cabin, and the upright seating positions make it incredibly spacious. Don’t believe me? Take a look for yourself – it’s here in black and white...

I’m undecided about the Soul’s styling, and only time will tell if this Kia will be a hit with younger buyers. But Otis’s plain white car is much less in-your-face than the flagship Burner model, with its glitzy exterior trim and bold alloys. The Soul is a well built, great-value supermini alternative, and the five-year warranty – now extended to seven years on new models – is fantastic. Yet the Kia lacks the dynamic polish to rival cars such as MINI’s Clubman.