Our practical Korean all-rounder proved its worth on a demanding trip to Belgium... 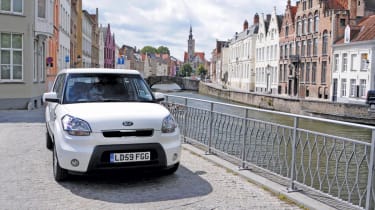 Instead of browsing brochures at my local travel agent to find a destination for my summer holiday, this year I sought inspiration from my European road atlas. Rather than catching the mandatory 4am flight from Gatwick Airport and heading for somewhere sandy in the Med to laze around, and ultimately end up getting sunburned, I wanted a break from the norm...

So when my girlfriend’s brother suggested we join him at a music festival in Hasselt, Belgium, I grabbed my sat-nav, sleeping bag and car keys and made good my escape.

The city of Bruges is only a short distance from Calais, so our itinerary included a brief stopover to see some of the sights.

A trip like this is something of a busman’s holiday for anyone involved with a car magazine, but I was still looking forward to seeing how the Kia wouldcope with the trip.

Our route took us around Brussels on a road that looks uncannily like Belgium’s equivalent to the M25. But it was business as usual for the Soul, which regularly slogs it out on the UK’s motorways during the course of my working week.

Yet while it is used to having its boot crammed full of kit, it rarely has four occupants. Our trip to the Continent was going to be a real test of its mettle. My expectations were high, though, as any passengers I have carried in the past have always remarked on how spacious it is in the back.

While the boot can’t match the carrying capacity of an estate car, it is quite deep and allows you to store a lot more than you expect. Once I’d packed all our gear, including a couple of bags occupying the middle rear seat, there was still plenty of room inside, so the Kia had cleared the first hurdle. But how would it perform with a full load? Once again, the Soul passed with flying colours. The ride was comfortable and the diesel engine delivered more than enough punch.

At the pumps, I managed 500 miles per tank, while the whole trip required only two fills at an overall average of 40.4mpg.

On my return, I realised that the things I remember most about the holiday are the bands, music, company and food. It’s hard to recall any arguments about what to pack because of lack of space, gripes regarding uncomfortable seats or anything else vaguely car related. And that’s a testament to the Soul’s practical design and capable dynamics.

My only concern now is what I’m going to use for next year’s holiday – the Soul is set to return to the maker in November. Its replacement certainly has big, practical and stylish boots to fill.

“Kia says the Soul isn’t a supermini-MPV, and now the firm’s spacious Venga has arrived, it’s easy to see why. But Otis has shown the Soul is as practical as it is stylish. Its boxy roofline ensures plenty of rear headroom and the tall driving position helps make it relaxing to drive.Ross Pinnock Road test editor