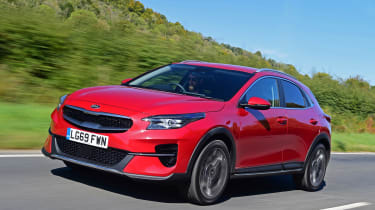 The XCeed’s range of conventional petrol and diesel engines is about par for the small crossover course; none exceed expectations on the fuel consumption or emissions fronts.

High-mileage buyers and company car users looking for the best in fossil-fuel consumption and BiK rates will be best served – perhaps counterintuitively – by the more powerful diesel engine: 53.3mpg and 138g/km of CO2 trump the 114bhp version’s 52.3mpg and 141g/km. The former is cheaper to buy outright, however, so it’s worth weighing up if you’ll benefit from the marginal efficiency gains.

The petrol models offer decent economy too; an average of 44.1 to 45.6mpg is possible from the 1.0-litre unit depending on wheel size, while the 1.4-litre returns 40.4 to 42.8mpg depending on wheel and gearbox options. CO2 emissions range from 140g/km for the entry-level petrol on its smallest wheels to 159g/km in the automatic 1.4-litre car.

For the ultimate in economy, the XCeed plug-in hybrid is by far the front-runner. Priced at over £30,000, it's the most expensive model in the range, but offers up to 201mpg on the combined cycle with emissions from 32g/km. There's also a useful all-electric range of up to 36 miles from a full battery - perfect for the urban commute. 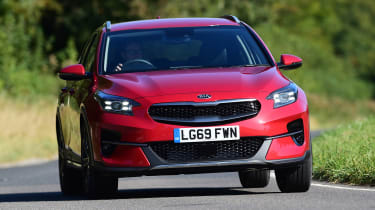 Insurance ratings for the Kia XCeed range from groups 12-18. The entry-level 1.0-litre petrol model will attract the cheapest premiums, with the diesel-powered versions sitting in group 15. You'll pay more to insure the XCeed PHEV, as both 3 and First Edition variants are in group 18.

Our experts expect that the Kia XCeed will hold on to around 40 to 48% of its original list price after three years and 36,000 miles come trade-in time, with the plug-in hybrid models achieving the best second-hand values.