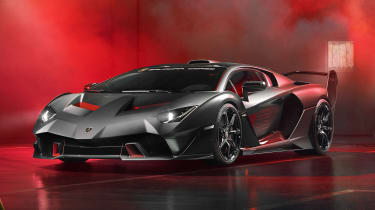 Lamborghini’s racing arm Squadra Corse has developed a new one-off hypercar, which it says is the first of many bespoke models it plans to produce for the Italian supercar marque.

Called the Lamborghini SC18, it’s based on the new Aventador SVJ, using the same part carbon-fibre chassis and a 6.5-litre naturally aspirated V12, developing 759bhp and 720Nm of torque.

Power is sent to a rear-biased all-wheel-drive system via a seven-speed gearbox, so we expect performance figures similar to those of the Aventador SVJ’s 2.8 second 0-62mph and 210mph plus top speed. 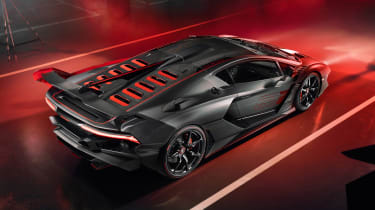 However, the all carbon-fibre body is radically different than the Aventador SVJ. The headlights are a nod to the original car, but not much else, with an assortment of aggressive aerodynamic tweaks intended to increase downforce. We can spy a new front splitter, huge new side air intakes, and a rear end inspired by the limited edition Centenario.

The centre-lock wheels are 20-inches at the front and 21-inches at the rear, shod with specially developed Pirelli P Zero Corsa tyres.

The car is road legal, but Squadra Corse says that the SC18 has been developed primarily for track use. No price for the one-off model has been revealed either, but it’ll more than likely be a multi-million pound item.

What do you think of the one-off Lamborghini SC18? Let us know your thoughts below...