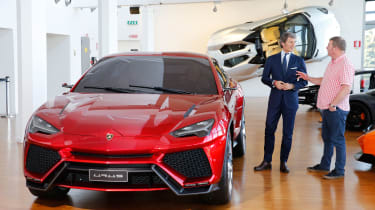 Domenicali, you may remember, took over from Jean Todt at the Ferrari F1 team in late 2007. The team won the Constructors’ Championship under his leadership in 2008. But from 2009 onwards Ferrari’s results went downhill in F1, due partly to the dominance of Red Bull, and in April 2014 Domenicali resigned his position as Team Principal. Since October 2014 he has been the boss at Audi Italia. Until now…

Urus SUV will take Lambo to the 'next level'

Domenicali will take over from the amiable Mr Winkelman at Lamborghini just as the famous old supercar company is poised to go to the ‘next level’ courtesy of the forthcoming Urus SUV. This is also Automobili Lamborghini’s 100th year. 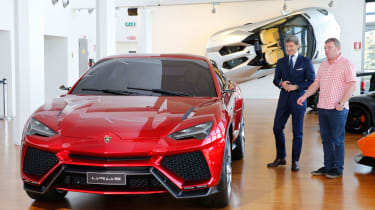 The Urus launches in approximately 18 months’ time and is already, according to Lamborghini engineers, a long way down the line towards production. It will, they say, be the most sporting SUV in the world when it arrives in late 2017, and by some margin.

Winkelmann, on the other hand, is destined for higher places within the VW empire. He leaves Lamborghini after 11 years at the top, during which time the company has more than doubled in size, both in output and profitability.

Ultimately this may even explain why he is being moved upwards within the VW empire, even though he would surely have wanted to see the Urus through to production.

But that’s not the way it works at VW. The unofficial company line states that no one individual can become bigger than the brand they represent, and Winkelmann was on the cusp of becoming that man at Lamborghini. With his snappy dress sense and smart business acumen, allied to an unceasing ambition to make everything at Lamborghini bigger, better and bolder, he was the archetypal charismatic car boss. Lamborghini suited his style to a tee.

Having interviewed him for one last time week at the factory last week, Auto Express now strongly suspects that he is making the move to Audi Sport through partially gritted teeth. Winkelmann wanted to see the Urus enter production before leaving, no question, and also to put the Asterion Hybrid on the same path.

But having spent time in the army and studied Political Science at university before putting in stints at Mercedes-Benz in Germany and at Fiat Auto in Austraia, Switzerland and Germany, Winkelman knows his way up and around the career ladder better than most. He will leave Lamborghini in rude health, and Auto Express wishes him the best of luck at Audi Sport, and beyond.

Meanwhile Stefano Domenicali, we presume but can’t yet confirm, will begin his new role at next month’s Geneva Motor Show. If so it will be him who removes the wraps from the new Centenario, a highly limited edition version of the Aventador with around 800bhp and a million pound plus price tag, built to commemorate the company’s 100th anniversary.

What do you think of the change at the top of Lamborghini? Let us know in the comments section below... 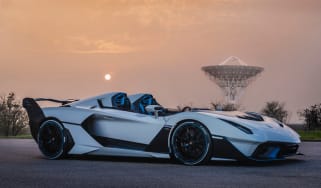