The two-wheel drive Lamborghini Huracan LP 580-2 is lighter and emits less CO2, too 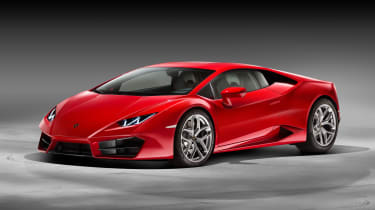 The Lamborghini Huracan LP 580-2 has been unveiled away from the glitz and glamour of the LA Motor Show, at an exclusive off-site reveal event.

The all-wheel drive Huracan will be made available with a rear-wheel drive powertrain later this year, tipping the scales at just 1,389kg – 33kg lighter than before. It gets a 40:60 front:rear weight distribution, stiffer suspension and a de-tuned version of the 5.2-litre naturally aspirated V10 engine.

However, with 572bhp, the rear-wheel drive Huracan is only two tenths of a second slower than the LP 610-4 from 0-62mph, covering the benchmark sprint in 3.4 seconds. It’ll do 199mph flat out, which is 3mph down on the four-wheel drive car.

Lamborghini says the LP580-2 has been tuned to provide “oversteering characteristics, which emphasise authentic rear-wheel drive behaviour.” A button on the steering wheel allows drivers to flick through the different driving modes, each of which has been recalibrated for this rear-wheel drive model. 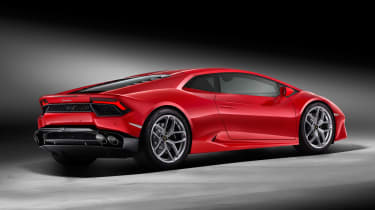 The mid-mounted V10 produces 540Nm of torque, with 75 per cent available from just 1,000rpm. Stiffer springs and anti-roll bars on double wishbone suspension boosts torsional rigidity over the old Gallardo LP 550-2 by 50 per cent.

Cylinder-deactivation technology is standard, allowing the car to shut down five of its 10 cylinders when cruising at steady speeds. The less powerful engine and rear-wheel-drive setup allows a drop in CO2 emissions from 290g/km to 278g/km.

It should be recognisable on the road too, but only to those with a keen eye. The existing Huracan has been redesigned with the help of Lambo’s aerodynamic experts and the Centro Stile design team.

There’s a set of new air intakes at the front, specially designed to increase downforce on the front axle, while the spoiler at the back works with the diffuser to improve airflow around the rear. All cars will come with Pirelli PZero-shod 19-inch wheels as standard, with 20s as an option. Other equipment includes the 12.3-inch Virtual Cockpit from the Audi TT.

UK prices have not been announced, but Lamborghini has confirmed it’ll cost €150,000 plus tax in Europe. That’s around €53,000 less than the four-wheel drive car, so with that in mind, we can expect a UK price of around £140,000 before options.

What do you think of the rear-wheel drive Huracan? Let us know below!