Lamborghini has built an SUV and claims that the mighty Urus is a class apart from all the others. We get behind the wheel... 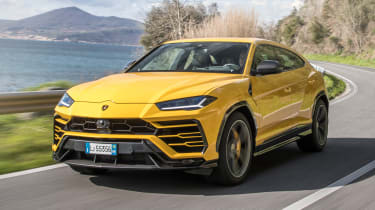 The Urus is never going to be to all tastes, but given the brief its maker set at the start of the project it’s a remarkably thorough job. This is a car of the type that Lamborghini’s customers said they wanted, and bar our reservations over the ride quality, it feels like the car they hope to get.

Lamborghini is largely credited with inventing the supercar back in the 1960s with the delectable Miura, and now it’s aiming to create a new niche at the top of the SUV market with this, the Urus, which the firm says is the first Super-SUV.

The Urus is based on the same chassis as the Porsche Cayenne and Audi SQ7, and like the Cayenne Turbo uses a 4-litre V8 twin turbo engine. However, Lamborghini has substantially reworked the engine from the turbos to the cooling system, tuning it to a massive 641bhp with 850Nm of torque. Therefore, in spite of tipping the scales at a hefty 2.2 tonnes the Urus can sprint to 62mph in just 3.6 seconds, and keep accelerating until it reaches a maximum of 189mph. This is one very fast SUV.

Lamborghini’s goal has been to combine the practicality and everyday usability of an SUV with much of the performance and drama of its supercars. To achieve this in a vehicle with off-road ability and seating for five people mounted higher than in a traditional car, it has had to throw all the technology it can at the Urus to cheat physics. There’s a sophisticated four-wheel drive system; active anti-roll bars that either resist roll or slacken off to help off-road driving; and rear-wheel steering, where the rears can turn slightly in the opposite direction to the fronts to make the Urus more agile. 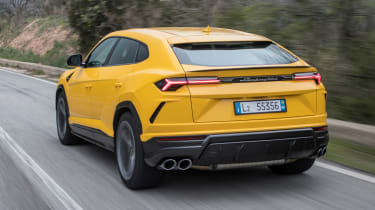 Controlling this tech, and more, is the job of the Tamburo, a collection of switches and levers at the base of the centre console. There are Strada (road), Sport and Corsa (track) modes, plus Neve (snow) and the optional Terra (gravel) and Sabbia (sand), and also the ability to tailor steering, engine and gearbox, along with the suspension, to individual tastes. It sounds complicated, but in practice works well, and you soon settle on a combination of settings that covers most situations.

The Urus is a big, intimidating car. At over five metres in length and two metres wide its got the measure of a Cayenne, although it is lower. That lower height is noticeable when you climb inside, because while the Urus driver sits above the majority of road users, it’s nothing like the view from within a Range Rover. That means visibility is nothing like as good either, but on the plus side the driving environment is far more sporty, the top of the door level with your shoulder to create a wrap-around effect. Leather, Alcantara and other materials are used together well, and the centre stack features the latest touchscreen as seen in recently launched Audis. Its glossy finish and strong colours are attractive, although you do have to get used to pressing the screen harder than first thought.

It’s a comfortable place to be, too, and largely the same can be said for rear seat passengers, unless they’re over six foot in height: then the sloping roofline of the Urus means headroom is a little compromised. There’s a choice of either a three-seat bench in the back or twin individual seats with electric adjustment for the full limousine experience, complete with optional screens on the back of the front seats. Luggage space is a reasonable 616 litres, rising to 1,596 litres with the seats folded. Lamborghini expects many of its buyers to use their cars as everyday or family transport, and apart from its extreme size that shouldn’t be a problem.

Lamborghini also states that this is the most potent of SUVs, and from the moment you depress the accelerator you’re left in no doubt what that means. The Urus blasts forward at every opportunity, consuming fuel and road space with the same enthusiasm, all while emitting a deep roar in its more aggressive settings. We drove the car on road and track, and its agility, braking ability and sheer cornering grip are a triumph of engineering knowhow over mass. 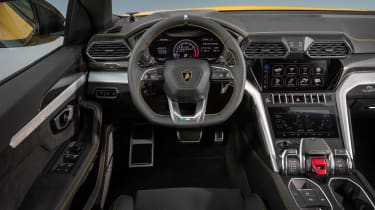 It’s by no means a difficult car to drive either, thanks to nicely weighted and accurate steering, and there’s none of the pitch and roll you might experience in a traditional SUV. In effect, you drive the Urus as you might a normal performance car, and its ability to turn into a corner, and suddenly change direction, is hugely impressive. You’d expect the brakes to fade almost after the first corner, but they hang in there for at least a few laps of committed driving. Then again, at 440mm in size for the carbon ceramic discs on the front axle, you’d hope for at least that.

Where the Urus struggles is with the comfort of the suspension over poor roads. It must be said that the route we drove the car on featured some very broken surfaces, and our car had the biggest wheels available on the Urus - massive 23” items. The standard 21” or the optional 22” wheels, with a thicker sidewall to the tyre, may fare better in this regard. As is, while the Urus was smooth and quiet on decent tarmac, as soon as the surface deteriorated there was too much noise and vibration transmitted to the cabin. Annoying for the driver, but especially so for rear seat passengers, where the sense of luxury was suddenly diluted.

The Urus is perhaps the ultimate symbol of conspicuous consumption, so a combined fuel economy figure of 22.3mpg and C02 emissions of 279g/km are hardly going to trouble its intended clientele. While it lists in the UK at around £165,000, Lamborghini expects most cars to retail at around £180,000 once the options - and there are plenty, from an off-road package to numerous interior trim finishes and colours - have been taken into account.

What to compare the Urus with is a harder question to answer. A similarly priced Range Rover SV Autobiography LWB offers perhaps even greater luxury, but not a fraction of the Lamborghini overall performance, while the Bentley Bentayga offers no more performance and a compromised ride - even more of an issue with a car aimed firmly towards the luxury-motivated buyer. Perhaps Lamborghini really has founded a new niche.