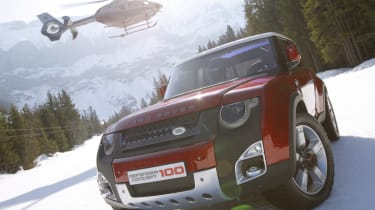 The DC100 shows that Land Rover is heading in the right direction with the Defender. It’s stylish, cleverly designed and should be capable. This hard-top will be one of a range of bodystyles, making the new car as capable on Forestry Commission duty as it is on the school run. With a choice of economical diesels, it should be cheap to own, too.

The Land Rover DC100 concept previews the car that will replace the 60-year-old Defender – which reached the magic two million mark earlier this year.
The show model debuted at Frankfurt last September, and we drove the open-top Sport version on sand in November. But this time it’s the hard-top on snow in the French Alps.
Replacing the revered Defender is a daunting task, but the designers have carried over some of the legend’s styling cues. The grille is clearly Land Rover, as are the near-vertical windows. There’s also a pick-up-style load area, like the canvas-covered section of the Defender, with a solar panel in the roof.
Inside and out the DC100 has far more glitz, from the funky door handles to the trendy yet spartan interior. The seatbacks are built into the bulkhead and the bases appear to float like stadium seats.

Shiny aluminium and bright orange grab handles surround the auto gearlever and centre display, while there are silver-finished details on the transmission tunnel and door handles. Tactile, high-quality cloth and plastics are used on the seats and doors. It’s all very modern, with bold shapes giving a strong and robust look.
Climb in and there’s plenty of head and legroom, while the flat, wide dash is neat and simple. The DC100’s engine fires with a meaty sound. This car is a Range Rover Sport under the skin, and the 510bhp supercharged V8 has an angry rumble that gives it the character of a Monster truck.
Push gently on the throttle, though, and you realise how much lighter the DC100 is than the Sport – helped by that empty, Defender-like rear cargo area. It leaps forward with real ferocity, crushing the ice we tested it on – although we were asked to avoid the softer snow drifts where possible.
While the steering is a long way from production-ready, it feels quite direct, so even in these slippery conditions it’s easy to place this priceless one-off.
Land Rover says this car is only a design concept, but the DC100 has an impressive list of technical innovations – the kind of features all Land Rovers could soon get. These include Auto Terrain Response, which can tell whether the car is on gravel, snow, sand, mud or tarmac, and adjusts the settings accordingly.
This set-up is so sophisticated that if the DC100’s front axle is on mud and the rear on grass, for example, it can switch to the correct mode on each axle. The next step, says Land Rover, is for high-definition cameras to ‘read’ the terrain and highlight areas where inclines are too steep or rocks too large for the car to tackle.
But off-road ability isn’t the only focus of the new Defender; the company wants to add some more “everyday usability”. Most impressive is the mobile key – a chip to operate the keyless entry that can be embedded in almost anything, such as a waterproof, shockproof bracelet.
The idea is that you leave the regular keyfob locked in the car while you surf, for example, and use the band to get in when you return. Clever.
We can’t wait to try all these features on the showroom-ready Defender, which will start from about £25,000 at launch in 2015.
Share this on TwitterShare this on FacebookEmail