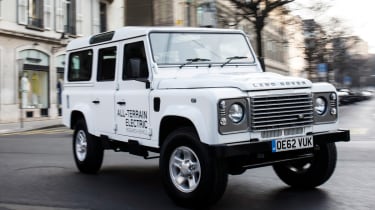 While an electric Defender sounds gimmicky, it’s much more than the automotive equivalent of fitting a pacemaker to an OAP. Off-road ability remains impressive, while on the road it’s adequately sprightly. It won’t make production but does provide an intriguing snapshot of what Land Rover is capable of.

Can you teach an old dog new tricks? Land Rover seems to think so with this electric version of the Defender. The venerable 4x4 can trace its roots back to 1948, and would seem one of the least obvious cars on the road to receive such a cutting-edge heart transplant.

But Land Rover is using the Geneva Motor Show to unveil a Defender 110 research vehicle that hints at tech that could be used in future models from the brand.

So how does it work? A 94bhp electric motor is paired with a 27kWh lithium-ion battery pack, and although the claimed range is a mere 50 miles, the reasoning is that the Defender will spend much of its time off-road, where speeds are slower. That means, in theory, the battery pack can last eight hours.

A fast charger gives a full charge in four hours, and that increases to 10 hours if using a portable 3kW charger.

Other key changes from the traditional diesel models include a total increase in weight of 100kg, which can partially be attributed to the 410kg front-mounted battery pack, and the introduction of air-cooling for the powertrain in place of liquid cooling. This saves weight and is claimed to be more robust – a key point given that durability is integral to the appeal of the Defender.

There’s regenerative braking, too, which uses Hill Descent Control to generate up to 30kW of energy.

Turn the key to start the electric version and the first thing that strikes you is the noise – there’s actually quite a lot. We’ve become accustomed to near-silent EVs, but this one delivers a rather wearing milk-float style whine. Refined it’s not, but you wouldn’t have it any other way with the Defender.

Fears over the electric 4x4’s capability are soon dispelled, though. Because the electric motor provides all 330Nm of torque from standstill, there’s no need for gearshifting – so you simply move the single speed drive selector into Drive and off you go.

And it works well. You quickly make progress, although the top speed on this research vehicle is limited to 70mph. It’s still a Defender, of course, so it’s rough and ready, but the electric drivetrain is a surprisingly plausible fit, if you can put up with the irritating soundtrack.

Off-road ability? You’d be forgiven for thinking electricity and water don’t mix, but that’s not the case – all the major components are watertight and it’s claimed to be able to wade up 800mm, which is 300mm more than the standard car.

We didn’t get the chance to try that out, but did put it through its paces on a man-made off-road climbing course where it dispatched every undulation, no matter how forbidding, with ease.

The electric Defender has an unusual past – it was originally conceived as an eco-friendly vehicle for a game reserve in South Africa – but it is the future that is more interesting. With hybrids, plug-in hybrids and even fuel cell vehicles planned, it shows Land Rover is firmly on the right track with its alternative fuel strategy.