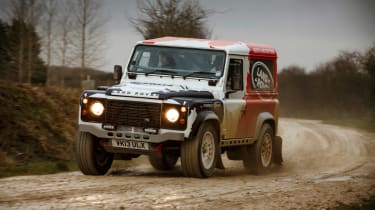 The Land Rover Defender Challenge is exactly that – a tricky rally car to drive, but one that a novice will be able to learn huge amounts from as they take their first steps to becoming a rally raid star. It’s robust, reliable and predictable, and cheap for a racer. Factor in Bowler’s huge experience, and the fact that the car is backed-up by a bespoke race series and it’s a compelling competition car. But best of all, it’s great fun to drive.

If you’ve dreamt of becoming an F1 star, there’s an established route to the top – as long as you can afford it, you start with karts and work your way up. However, if you’ve set your heart on a proper challenge – driving the Dakar – there’s no equivalent racing ladder.

That is until Derbyshire-based endurance rally specialist, Bowler Motorsport, and Land Rover created the Defender Challenge – a one-make rally car that provides the first step on the road to Dakar success. And we’ve driven it.

The Bowler is based on a standard Defender 90 hardtop, but getting in is trickier as you have to post yourself over the roll cage and into the racing bucket seat.

Start the engine and the interior rattles and shakes even more than normal, but getting up and running is no harder than in the standard model – the gearshift is the same, and the steering is as slow as in the regular Defender, although the wheel is now a racy-looking Alcantara-covered thing.

However, Bowler has been hard at work with the fully uprated suspension system that gives a very firm initial ride. However, the big bumps sent through the cabin are the same whether you run over a rock, a small speedbump or a smash through a huge ditch.

It’s hard no to smile when you thump the car over a pothole that’d swallow a supermini and the Defender just rebounds and carries on.

The Defender’s high centre of gravity and short wheelbase makes for very lively handling. Cornering takes time to master, especially on the slippy test stage we drove on. You need to stomp on the uprated brakes in a straight line, make sure the front tyres bite into the soft gravel and, once it grips, accelerate and surge round each bend using the engine’s excellent mid-range punch.

It’s great fun and a real challenge to drive, but that’s exactly how it’s been set up, so novice drivers can refine their driving style in a relatively low-pace and cost effective car.

The Challenge costs £50,000 to buy and will be eligible to compete in a seven-round UK championship run by Bowler that costs another £10,000 to enter.

Bowler has sold 11 cars so far, and plans to offer international races in the future too, as the car is fully FIA certified. The racer is fully road-legal, but you can buy a road-prepared one, with different tyres, should your trip to the shops be really extreme.

Karting is a great laugh, but it can’t match the entertainment of hurtling between the trees in a race-prepared Defender. It’s a great way of bringing the Dakar dream one step closer.

• News: The most luxurious Land Rover Defender ever?