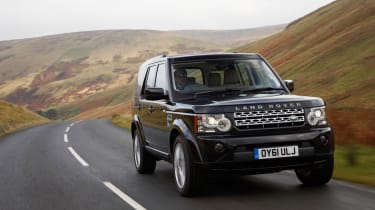 It’s fair to say that the Land Rover Discovery 4 is a first-class family car. It combines the luxury and build quality of the more expensive Range Rover with the off-road ability of a Defender, yet offers versatility which is unsurpassed. The engine and gearbox updates also mean it’s more efficient than ever, so there’s no reason why the Discovery shouldn't hold on to its title as the best 4x4 available today.

If there’s one manufacturer that knows a thing or two about building off-roaders, it’s Land Rover. However, the Land Rover Discovery 4 is also one of the best family cars you can buy, which is why it was voted Best SUV in our 2011 New Car Awards, despite stiff competition from a slew of newer rivals. Land Rover isn’t resting on its laurels, and there's a more refined Discovery for 2012.
One area where the Disco package fell down was with its high emissions figures. But for 2012 Land Rover has introduced two power outputs for the 3.0-litre V6 twin-turbodiesel. The higher powered version has jumped from 242bhp to 252bhp, but emissions have dropped from 244g/km to 230g/km, bringing the Discovery in line with the most efficient off-roaders available. Even better than that, the entry-level diesel, which makes 208bhp, has emissions of 224g/km, which drops the Discovery down two road tax bands.

Video: watch CarBuyer's video review of the Discovery 4
The new engine is only part of the story, as all cars get an eight-speed ZF gearbox which is more efficient than the seven-speed unit it replaces. It’s operated with a Jaguar XF-style dial selector that rises from the centre console, which is a neat touch.
Elsewhere inside, the touchscreen sat-nav system has been given a makeover with bolder graphics, there’s polished silver trim on the centre console and doors, and all models in the range now get a premium Harman Kardon sound system.
The Discovery’s talent for carrying passengers hasn’t changed, and the cabin is big, airy and comfortable. There’s room for three adults in the back, while another pair of seats can be found in the boot, which further adds to the Discovery’s versatility.
On the road, the Discovery is a comfortable cruiser that’s capable of covering long distances with ease. You have a commanding view of the road ahead, while the new high-power diesel has plenty of punch to make light work of the Disco’s weight. In fact, the only time you’re really aware of the car’s size is under heavy braking.
The new eight-speed auto shifts smoothly, which makes the wheel-mounted paddleshifters somewhat redundant, and it kicks down quickly when you need extra power, although it does seem to do this quite frequently when you’re on the move.
Of course, where the Discovery really stands apart from other family cars is the fact that it can tackle virtually any terrain you throw at it. Simply switch Land Rover’s Terrain Response system to the setting you require, and the Discovery can go places where even rival SUVs would fear to tread.
Share this on TwitterShare this on FacebookEmail