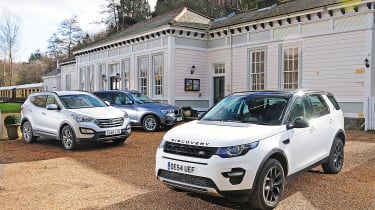 It’s the dawn of a new era for Land Rover, as the big-selling Freelander has been laid to rest and replaced by the Discovery Sport.

The newcomer is bigger than its predecessor, there are now seven seats, and it takes its styling cues from the Range Rover, both inside and out. To find out if the new Brit has what it takes to succeed, we’ve lined up two rivals that will test all its abilities.

The seven-seat Hyundai Santa Fe is our current large SUV champion, and the Premium SE model is well equipped, yet undercuts the Discovery Sport on price. Then there’s the BMW X3. While it’s not a seven-seater, this SUV will test the Land Rover’s premium credentials, as well as its fuel efficiency.

Can the Discovery Sport deliver a winning combination of practicality and luxury, while still maintaining Land Rover’s tradition for building great off-road machines? 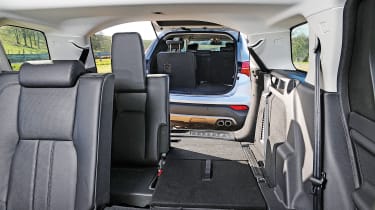 There are two seats in the boots of the Land Rover and Hyundai, but they’re quite small – so unless you’re carrying children, they’re only really for occasional use. Go for a lower-spec Santa Fe, and you can save £1,200 by opting for five seats, and get a bigger boot in the process. The Discovery Sport is only sold in the UK as a seven-seater, although if there’s sufficient customer demand, it may be offered as a five-seater later in the year. 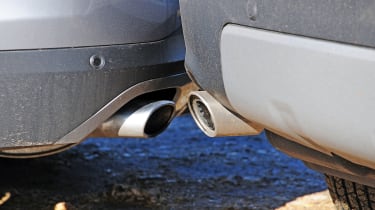 As it emits 166g/km, the Discovery Sport sits three road tax bands higher than the 138g/km X3, and will cost company buyers more. The Santa Fe lags well behind its rivals here, thanks to the lack of stop/start. Go for the manual, and emissions of 159g/km are still some way short of the X3’s.

These three cars are perfect for towing. The Santa Fe and X3 are capable of pulling two tonnes, but the Discovery Sport edges ahead with a 2.2-tonne maximum. Land Rover offers a detachable tow bar for £675, while BMW’s £765 version hooks up to the ESP to add trailer stability control. 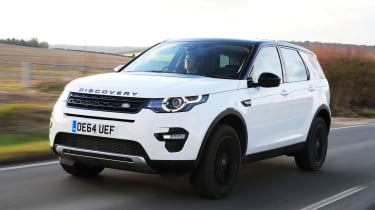 It’s first blood to the new Discovery Sport. Land Rover has taken the Freelander formula and brought it up to date with stylish design, a premium interior and refined road manners. It’s spacious and practical, well equipped for the price, while excellent off-road ability is a cheeky bonus. The seven-seat layout isn’t the roomiest around, but it doesn’t harm overall practicality in any way. 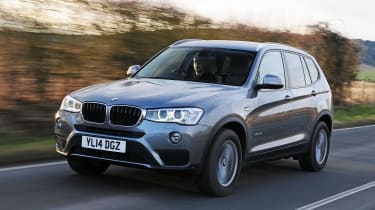 The X3 is still a strong contender in the compact SUV class, thanks to its excellent combination of efficiency, performance and sharp handling. It’s also well equipped and roomy, but an overly firm ride and the noisy diesel take the edge off driving comfort. The lack of seven seats isn’t really an issue, though, as it’s still a practical five-seat family car. 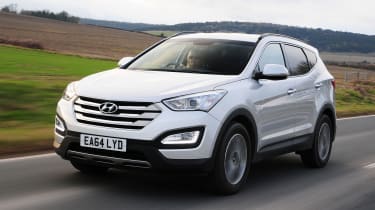 There’s no disgrace in the Santa Fe finishing third here. Only a few years ago, you wouldn’t have considered a Hyundai over its premium rivals, but while the SUV is roomy and well equipped, it’s thirsty, has ponderous handling and doesn’t quite have the premium feel of its rivals. We’d save some cash and go for the excellent Premium manual model instead.