Does the Range Rover Evoque’s new range-topping diesel come at a price? 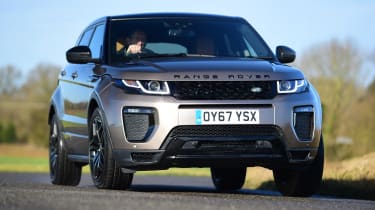 We can’t deny the appeal of the extra performance that the SD4 engine brings, but we have some reservations. Firstly, it’s a very expensive option; and, secondly, all that extra power only serves to highlight the shortcomings of the automatic gearbox. The Evoque remains an attractive and desirable vehicle, but we reckon a cheaper version is more desirable still.

The Range Rover Evoque has been one of the most desirable SUVs in the UK since it was launched in 2011, and Land Rover has wisely tinkered only slightly with its looks. Instead, the most major changes are under the skin.

The engines, in particular, have been a focus of the company’s attention, with its range of Ingenium units being introduced. The latest to join the line-up is the range-topping SD4 diesel, with two turbochargers helping it to produce a hefty 237bhp and 500Nm.

It’s the first time Land Rover has used this ‘series-sequential boosting’ system, with the smaller turbo helping at low revs, and the larger second turbo joining in at higher engine speeds. In fact, this is the most powerful engine in the range (along with the Si4 petrol unit), as well as the unit with the most torque. 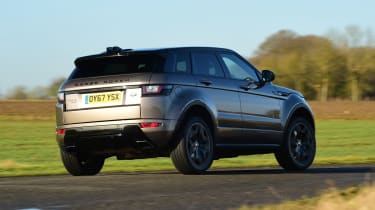 It’s enough to give the car pace not far short of what you’ll find in a similarly-priced Porsche Macan S Diesel, but with better claimed fuel economy.

Once you’ve got the Evoque up and running, it’s the torque that makes the most lasting impression. With peak pull arriving at just 1,500rpm, it responds very keenly in pretty much any situation – and certainly more quickly than you would expect of a four-wheel-drive car that weighs well over 1,800kg.

If we have a criticism, it’s that the Range Rover doesn’t feel as quick as the 6.9-second 0-60mph time suggests. But across country, this is a fast car. 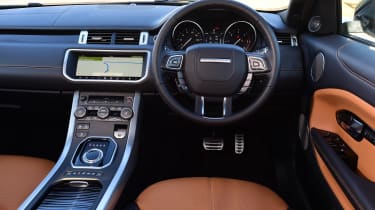 At these speeds and in these situations, too, the automatic gearbox is working at its best. On the motorway or sweeping main roads, the Evoque SD4 is a very pleasant companion.

However, around town or on tighter, twistier roads, things aren’t quite so rosy. In particular, the extra power of the engine shows up the shortcomings of the transmission; it can struggle to work out which of the nine gears at its disposal is the most appropriate at any given moment.

It seems to struggle most when you are coming on and off the accelerator pedal – when you are in heavy traffic or encountering a series of junctions or roundabouts, for example. What happens is that, when you lift off and start to coast, the gearbox shifts up a gear or two, so when you then get back on to the throttle to pick up speed again, the set-up is a little hesitant to kick down. And when it does, it engages the gear with a real jolt. 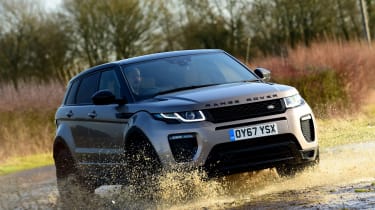 To make matters worse, in heavy traffic around town, you notice how gruff the engine is at low revs, when it’s working hard to get two tonnes of car and its contents moving. And thanks to the 20-inch wheels fitted to our test model as part of its HSE Dynamic trim, you also feel all the bumps that litter city streets. The other price you pay is when you buy the car in the first place. This diesel is available only with the top trims – HSE Dynamic and above – and it’s the most expensive engine in the Evoque range.

Whereas the 178bhp TD4 has claimed fuel economy of 55.4mpg when paired with an automatic gearbox, and isn’t exactly slow, the comparable figure in this SD4 is 48.7mpg; and the higher CO2 emissions will bring bigger tax bills for company car users, too.