The original Range Rover Evoque was revealed in 2008 by Land Rover to a general ‘wow’, and customers queueing up with deposits clutched in sweaty palms. The ‘wow’ that accompanied the new Range Rover Evoque Convertible was relatively muted, and possibly a little more thoughtful in tone, as we all sat back and wondered how we’ve managed for so long without a luxury SUV drop-top in our lives.

Manage we have, but the new Evoque Convertible has arrived unabashed to stake its claim on a brand new niche. Whether it will herald a surge of used Range Rover Evoque for sale ads in the classifieds as customers clamour to be the first convertible 4x4 on the school run remains to be seen.

The Evoque Convertible was revealed at the LA Motor Show in 2015, and frankly there’s a reason for that. The eye-catching machine definitely looks more Rodeo Drive than Birmingham Bull Ring, but that’s not going to stop the ragtop Range Rover selling over here. 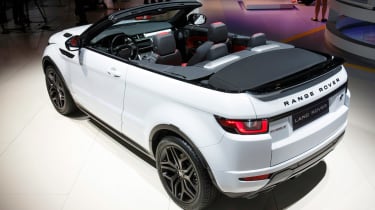 While open-topped utility vehicles like the original Jeep and Land Rover sowed the seeds of the thriving SUV sector and have been around since the middle of the last century, there’s not really been a luxury convertible off-roader in mass production before. Land Rover isn’t being shy about its upmarket positioning either, as the Range Rover Evoque price list starts at a weighty £47,500.

That means the Evoque cabriolet is £5,200 more than its hard top sister model, which might seem a lot but is not much more than the premium placed on the BMW 4 Series which costs £4,885 more than the coupe. The BMW does benefit from a folding metal roof, of course, while the Evoque makes do with a fabric job.

Apparently packaging difficulties made it impossible for Land Rover designers to equip the Evoque with a folding metal top, but the fabric one doesn’t look any less premium. It’s fully automated of course, which means you can expose your Evoque interior to the open air – or shut it away again – in just 18 seconds.

Auto Express was treated to an exclusive preview of the new car, ahead of its debut at the 2015 Los Angeles Motor Show, with Land Rover design director and chief creative officer Gerry McGovern showing us around. “Evoque is a car that really resonates with people,” he told us, “which is why over 450,000 have been sold so far.

“It’s really changed the culture and attitude within our organisation, too, and this convertible is a natural progression for Evoque – but it wasn’t easy to do.”

Although the concept was well received, a production version has many more challenges and we’ll admit to some nervousness about seeing the finished car.But in the metal, it’s clear McGovern and his team have produced a convertible that still has the Evoque’s striking (and popular) good looks, with the hood up or down. 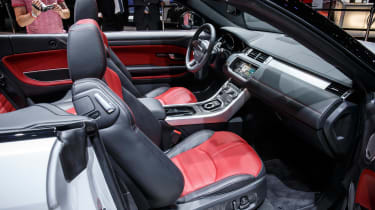 McGovern said: “The biggest challenge was keeping the purity of the design with the packaging necessary for a convertible. The rising beltline gives it distinctiveness, while helping to disguise the hood mechanism and allowing decent boot space.”

“It still keeps its stance, though – it looks like a tough so-and-so.”

The Convertible is marginally longer than the hard-top cars, at 4,370mm, and a touch wider, too. And with extra strengthening round the A-pillars and under-body bracing to keep the car’s structural rigidity, there’s been a bit of a weight gain, too – an extra 277kg in the case of the diesel models. 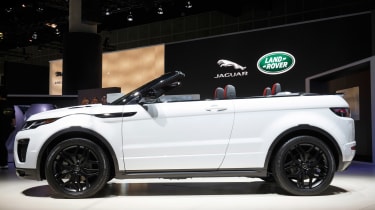 Most British Evoque Convertibles will be diesel, with the TD4 178bhp Ingenium engine, although the 237bhp four-cylinder Si4 will also be an option. Both come as autos only in top HSE Dynamic spec or for an extra £4,200 HSE Dynamic Lux trim.

Under the skin, the all-independent suspension and anti-roll bars have been tweaked to compensate for the extra weight, while the electric power-steering has been retuned, too. 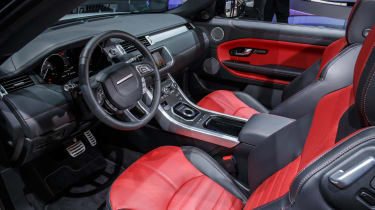 As was clear from our initial ride none of the Evoque’s off-road prowess has been lost in the conversion to convertible – it’s still a proper 4x4.

But as with nearly all convertibles, the Evoque seats only four people – the fifth making way for the hood folding mechanism. You can also fit an optional wind deflector behind the front seats, effectively turning the car into a two-seater, but it should ensure that your hair do doesn’t become a hair don’t.

If you do sit in the back, head and leg space is okay, with decent access, too. Boot capacity is still acceptable, at 251 litres, although the opening is a bit letterbox-like. Sitting on top of the boot is a cute-looking spoiler that also houses the third rear brake light. Gerry McGovern describes it as a “bib spoiler” and confirms it’s there for aerodynamic reasons.

Land Rover has used the arrival of the Convertible to introduce a host of new tech to the car, starting with the latest InControl Touch Pro system with its super-wide 10.2-inch touchscreen and 3G Internet connectivity. 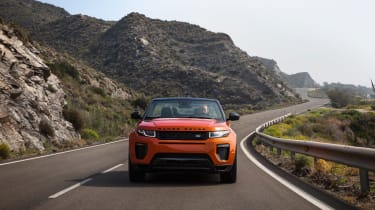 As well as providing navigation and access to the Meridian-supplied sound system, InControl includes various apps that can work on smartphones, plus remote tracking and a Wi-Fi hotspot. However, Apple’s CarPlay and Android Auto connectivity is still “a little way off”.

New all-LED headlights have been added, along with autonomous emergency braking to prevent slow speed nose to tail shunts and the latest driver assistance technology.

Land Rover is further stressing the car’s luxury credentials with leather seats on all models, plus personalisation options including the ability to have your own name inscribed in the treadplates.

As first rides go, this was pretty unusual. We didn’t bother with tarmac, but headed straight to the rough stuff in the new Evoque Convertible to prove it’s a real Land Rover. 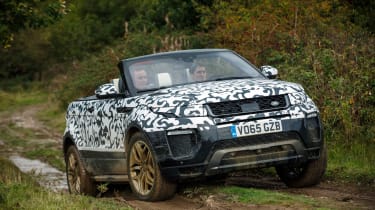 However, what impressed us most about our short sojourn over one of Land Rover’s milder off-road tracks was not the ease with which the new car rode the ruts, but the lack of any trace of chassis wobble.

Chopping the roof off any model can have a dramatic effect on dynamics, and that would be exposed more over the bigger ruts and ridges on an off-road course.

On road in some of the best convertibles, you can still feel the chassis flex slightly as you hit a pothole. The Evoque Convertible stayed resolutely silent as we went across dips and up slopes, with no signs of the rattles or creaks that, frankly, we might have expected.

It proves Land Rover has done a good job retaining the structural rigidity of the Evoque, which bodes well for on-road handling as well as safety.

For the record, the Evoque Convertible can also cope with 45-degree gradients and 35-degree tilts, and wade through water 500mm deep. All a rather odd sensation in a luxurious cabin with just the sky directly above you.

Do you think the Range Rover Evoque Convertible will be a sales success? Let us know in the comments section at the bottom of this page...