The Range Rover Sport HST debuts the brand's new 3.0-litre straight-six engine, which will eventually make its way into most of JLR's range 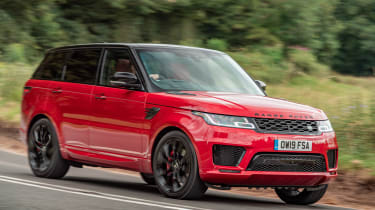 It may not look much different, but beneath the bonnet this new Range Rover Sport HST is very different indeed. This engine technology will make its way into many other Jaguar Land Rover models in the next few years and, mostly, it works a treat. It's smooth, fast, and relatively economical – and in something like a Jaguar XE it should provide real fireworks.

It costs a whopping £81,250, and for the time being it’s special order only, but the new Range Rover Sport HST is a hugely significant vehicle – not just for Land Rover, but for the entire JLR organisation.

Why? Because its new 3.0-litre straight-six petrol engine contains technology that will, in the fullness of time, find its way into much of the maker’s range.

JLR announced recently that by 2020 every single car it sells will contain some kind of electrification or will, indeed, be a full-EV. It was a bold statement, yet the engine in this new HST proves that it’s not, in fact, hyperbole. 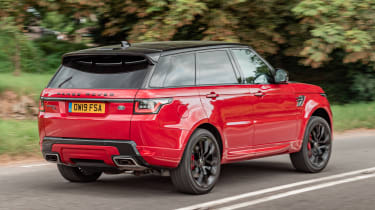 It’s a straight-six rather than a V6, for starters, with Land Rover’s engineers claiming that an in-line arrangement is inherently smoother than a vee. In-line sixes were, after all, a part of the Jaguar design ethos, long before they swapped to V8s.

But the more significant aspects of this brand-new engine concern its 48v electrically powered supercharger, and its more conventional turbo, plus its mild-hybrid system, which also uses a 48-volt battery.

Together, these elements help the HST generate 395bhp and 550Nm, from a mere 2996cc. But what defines the HST’s engine is, says Land Rover, that smoothness – allied to its much improved efficiency and economy.

So while the HST manages only 30.5mpg on the combined cycle and still emits 213g/km, these are decently impressive numbers for a 2.5-tonne vehicle, especially when you consider that the 0-62mph takes just 6.2 seconds, with the top speed quoted at 140mph.

The engine works in an intriguing way, too, with the electric supercharger effectively filling in the gap where the turbo suffers a natural degree of lag. You also get mild regeneration from the hybrid system under brakes or when you lift off, so the system is constantly recharging itself, albeit subtly. 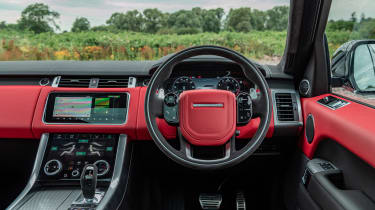 On the move it means the HST feels unusually smooth and potent, especially in the low to mid-range. It feels like you’ve got an atmospheric 4.0-litre engine beneath your right foot, and despite the technology it feels very natural in its delivery, which is something Land Rover’s engineers worked especially hard to achieve.

If there is a criticism it’s that the engine doesn’t feel or sound just as silky as it could, or should, in the very upper reaches of the rev range. It doesn’t feel particularly strained, and there are no unwanted vibrations at high revs, but neither does it sing over the last 1,000rpm. In a Range Rover this doesn’t really matter, of course, but in the more sportingly Jaguar XE or XF – both of which are calling out for this engine – it may be more of an issue.

Elsewhere, the HST gets a unique set of design features, both inside and out. On the inside there is Alcantara on the steering wheel and gear lever, and the seat trim is bespoke. On the outside there are new alloy wheel designs (two to choose from) and ever so slightly vulgar red brake calipers to distinguish it from its lesser siblings.