The Range Rover Sport bridges the gap between Range Rover and Discovery, but it's not as much fun to drive as a BMW X5 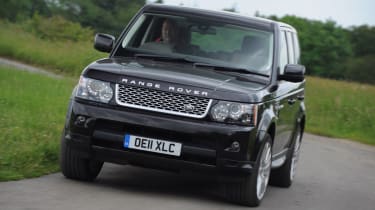 As the name suggests, the Range Rover Sport is designed to be a sportier looking, more fun to drive version of the Range Rover flagship. It targets models like the BMW X5 and X6 as well as the Porsche Cayenne, which are all very enjoyable to drive. The key difference is that the Sport is still as capable off-road as its flagship brother – something its rivals simply cannot match. It also has a fabulously well appointed cabin, while a powerful turbodiesel and searing V8 supercharged petrol provide something for everyone. However, it's very expensive to run indeed.

The Range Rover Sport is a more involving and fun drive than the Range Rover - it has a firmer ride, turns into corners more quickly and generally feels more agile. You can also select 'Sport' mode from a dial on the centre console which reduces body roll further. This is all relative though - the Sport still weighs 2.5 tonnes and doesn't feel as responsive as the lighter and more wieldy BMW X5. The pay-off for the tighter body control is that the ride suffers a bit - you feel more bumps in the road, whereas a Range Rover would simply glide over them, although it's still a very comfortable and relaxing car. As for performance, the 252bhp 3.0-litre SDV6 diesel is quick, with a 0-60mph time of 8.8 seconds, and its combination of 600Nm of torque and a responsive eight-speed auto, has lots of overtaking urge. It is also smooth and quiet. The 503bhp 5.0-litre supercharged V8 petrol is a different matter entirely - it's incredibly fast (0-60mph in 5.9 seconds) and makes a great noise on full throttle. Both models are quiet and relaxing when cruising on the motorway, even if there is some wind noise thanks to the car's large front area and big wing mirrors.

If you are looking to limit running costs, it's unlikely you'll be in a Range Rover showroom. The 3.0-litre V6 diesel manages 32.1mpg combined while the V8 petrol is incredibly thirsty - it will return 19mpg according to official figures but in reality it's likely to be even less. As for tax, both are very expensive to run - the diesel emits 230g/km of CO2, while the petrol throws out a disappointing 348g/km. Tyres and servicing will also require a sympathetic bank manager.

With a lower roofline and steeply raked tailgate, the Range Rover Sport looks more athletic than the Range Rover – although it still features all the trademark styling cues of its flagship brother, including a clamshell bonnet and a floating roof. Familiar Land Rover traits like the stunning headlight design and luxurious interior are present, while there's a wide range of colours and wheel options, too. With a new Range Rover just around the corner, we expect a revised Sport to follow.

The cabin is a sumptuous place to spend time, combining a commanding driving position with a beautiful mix of wood and metal. What's great is that is has the luxurious feel of the Range Rover, but costs a lot less. Even entry-level SE cars get sat-nav and a brilliant Harmon Kardon stereo, plus Land Rover's excellent dual-view screen, which allows the passenger to watch a movie while the driver sees instructions from the sat-nav. Flagship HSE models get even more goodies. Thanks to the brilliant Terrain Response system - which offers lots of off-road settings via a dial on the centre console – the Range Rover Sport is sensationally good in the rough stuff. There's a 958-litre boot in the back which expands to 2,013-litres with the rear seats folded. There's lots of room inside, but if you wanted ultimate practicality, you're better off with the cheaper seven-seat Land Rover Discovery 4. An electrically operated tailgate takes the strain out of opening the boot, while a large central storage box between the front seats, and an enormous glovebox boost practicality.

Aside from all the traction and stability control systems, permanent four-wheel drive, a host of airbags and all that metal surrounding you, the Range Rover Sport boasts a maximum five-star Euro NCAP crash safety rating. On the other side of the coin, reliability has never been a Land Rover strong point, and there have been a couple of minor recalls for the Sport. But the firm has made great leaps over the years, and we expect the latest Range Rover Sport to be on a par with its rivals.