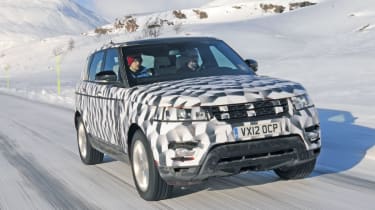 Riding as a passenger in a new car isn’t the same as driving it, but there’s lots to be excited about after my first spin in the 2014 Range Rover Sport. I am the very first journalist in the world to experience this disguised prototype version, powered by Land Rover’s SDV6 3.0-litre turbodiesel engine.

Plus, I have the new Range Rover for comparison, and access to the Land Rover cold-weather test facility in northern Sweden.

The company’s engineers have worked hard to ensure the Sport is more clearly differentiated from the regular Range Rover this time around – despite the two sharing the same aluminium platform.

In fact, vehicle engineering manager Craig Carter tells me that this has been the most difficult, yet ultimately most satisfying, aspect of the car’s development.

Craig explains: “We found the sweet spot between making it handle really well at the Nürburgring, where the car can lap at around eight minutes and 40 seconds [rivalling hot hatches], and being in a different league off-road.” He adds: “We can only benchmark the new Sport against our other models off-road, as the BMW X5 and Porsche Cayenne just can’t handle the type of routes we do.”

As well as handling courses on the frozen lake, Land Rover’s test centre in Revi, Sweden, has an off-road course. It weaves through a pine forest, and is designed to replicate the most challenging tracks at the Range Rover off-road testing base at Eastnor Castle in Herefordshire.

Off-road, the Sport is impressive. Although it doesn’t have the ground clearance of the larger Range Rover, it uses the very latest settings for its Active Roll Control, so you don’t get bounced from side to side as aggressively as in the Range Rover.

Land Rover has a policy that its cars should get at least five per cent better with each model year. That sounds like a lot, especially for a car that feels even more refined off-road than the imperious flagship model. But the Sport is a talented performer on the rough stuff, thanks mostly to its advanced Terrain Response System and improved wheel travel.

Add in the impressive dynamic performance on tarmac, and the new Range Rover Sport feels like it has great potential, whether you take it to a circuit or an off-road track.

Luxury is still high on the list of priorities, but the Sport isn’t quite as refined as the standard Range Rover. There’s slightly more engine noise in the cabin thanks to a smaller bash plate and different exhaust, which allows more sound to enter the cabin, creating a sense of sporty engagement that the standard Range Rover deliberately avoids. And instead of the old rotary gear selector, the Sport has a gearknob for the automatic transmission.

Other interior changes include front seats that are mounted 20mm lower than in the Range Rover, a smaller steering wheel and better-bolstered seats offering greater support for the driver and passenger during hard cornering.

The Terrain Response system has all the familiar off-road modes, plus a Dynamic mode that reduces the stability control’s effect.

It also sharpens up gearbox, throttle and steering response, and we could feel the difference from the passenger seat while out on the frozen lake.

Handling is further improved by a new Torque Vectoring by Braking system, which brakes the car’s wheels individually to minimise understeer and maximise grip. The system also locks up the rear differential imperceptibly, helping you to accelerate out of a bend. Away from the frozen lake and on to the open road, you can feel that the ride has been firmed up.

The Sport doesn’t float over larger undulations, nor does it absorb smaller bumps like the Range Rover can, but it seems to stay flatter under cornering. You can tell that the steering is more direct, too, as you get moved about by smaller corrections made on the motorway.

The upshot of all of the Sport’s new handling systems is that it always feels like it has rock-solid grip, even as the road surface changes from deep, fluffy snow to sections of harsh black ice.