The 2014 Range Rover Sport is now available with the 4.4-litre V8 found in full-size Range Rover 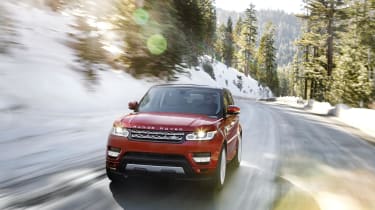 Adding the larger SDV8 diesel to the Sport line-up is a no brainer. Its characterful, torquey delivery is a great match for the car’s well-tuned chassis, and gives it a staggering breadth of capability, from mud-plugging off-roader with an 850mm wading depth, right up to a potent driver’s car that delivers a surprisingly engaging, accurate and well-honed way to take on your favourite road.

The Range Rover Sport is now available with the 4.4-litre V8 turbodiesel found in the full-size Range Rover. To suit its new application, the engine has been given its own ECU calibration plus a revised intake.

And it’s the latter that makes is presence felt the most. Even under light throttle loads, and with the Terrain Response set to its default automatic mode, the engine emits a gurgling, bassy noise that penetrates the cabin much more obviously than in the Range Rover.

Press the rotary Terrain Response controller and rotate it all the way to the left and Dynamic mode is engaged. This gives extra weight to the steering, particularly when moving the wheel off centre, and the most aggressive response from the throttle and gearbox. The engine is a great performer, pulling strongly from low revs and giving the 20-inch wheels plenty to deal with, particularly if the conditions are wet. The Brembo brakes are impressive at shedding speed, too, and have a progressive, confidence-inspiring pedal feel, even after plenty of hard driving.

The firmer setup for the air suspension rounds off lumps and bumps in the road and keeps you connected to, rather than cosseted from, the road surface as it does in the Range Rover. Despite this being a large, luxury SUV, the body control is impressive, even with the heavier diesel V8 in the nose – dive under braking is minimal, while roll is well contained so your passengers won’t get thrown around the cabin.

The stiffer setup means turn-in is very sharp for a big car, too, and approaches a level of dynamism that only the Porsche Cayenne has offered so far. Dynamic mode gives the powertrain a rear-wheel-biased feel, which is particularly noticeable when accelerating through tighter bends, and makes the Sport a surprisingly engaging drive that’s not unlike a larger, faster version of the Evoque.

The gearbox is a good match for the engine, too. It’s the much-vaunted ZF eight-speeder used by BMW to great effect, and shifts quickly and smoothly, barely interrupting the passage of power from the Sport’s new engine to all four wheels. Manual shifts are very swift, too. These can be done by pulling the gearknob across to the left, then back for up and forward for down, just like the sequential box of a racing car, or via steering wheel-mounted paddles. The latter are the most practical, but it’s a shame that the paddles themselves are made of thin plastic, as they are right across the JLR line-up, rather than some nice, tactile metal as they are on a similarly priced Porsche.

And after all that fun, switch the Sport back to Auto and it becomes a luxurious, quiet cruiser. It’s a different animal to a Range Rover, and has quite a different appeal. But if you enjoy driving, rather than being driven, then the new diesel model could well be the sweet spot in a very competitive range.